Following five years of rapid growth, the budget for the Department of Energy’s National Nuclear Security Administration would level off near $20 billion under the House’s and Senate’s spending proposals for fiscal year 2022, which hew closely to the administration’s topline budget request.

However, Congress has yet to agree on overall limits on federal spending for the year, which is a matter that will require Democrats to secure assent from some Republicans, who have criticized their spending ambitions for DOE’s clean energy programs while arguing a largely flat budget for NNSA is insufficient. To bolster their case, some leading Republicans have pointed to a letter the Nuclear Weapons Council recently sent to Congress that states NNSA’s requested budget is “minimally sufficient” and “injects risk” into plans to modernize the U.S. nuclear weapons stockpile.

Among NNSA R&D programs, the House and Senate proposals do significantly exceed the administration’s request in areas such as stockpile assessment science and inertial confinement fusion. Proposals for specific programs are detailed in reports by the House and Senate Appropriations Committees on their respective spending bills for DOE. Detailed figures are collected in FYI's Federal Science Budget Tracker. 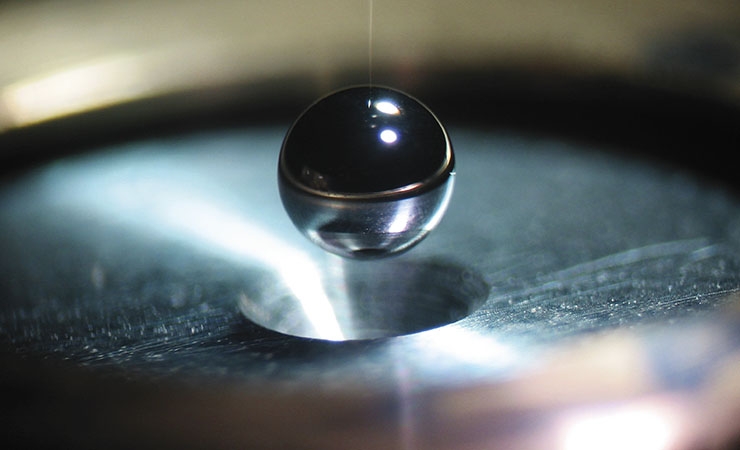 The laser target of the National Ignition Facility is a polished capsule of about two millimeters in diameter that is filled with a tritium-deuterium mixture, which serves as the fuel for a fusion reaction. (Image credit – Lawrence Livermore National Lab)

Inertial Confinement Fusion. The House and Senate both propose to increase the ICF program budget by $5 million to $580 million, while the administration requested a cut to $529 million. Both also specify that the program’s three major research facilities should receive at least level funding: the National Ignition Facility at Lawrence Livermore National Lab, the OMEGA Laser Facility at the University of Rochester, and the Z Facility at Sandia National Labs. The Senate also directs DOE to allocate at least level funding of $6 million for NNSA’s contribution to the Naval Research Lab’s Nike Laser, which the administration proposed to zero out.

Notably, NNSA reported in the budget request that a recent internal review concluded that achieving fusion ignition with NIF is “likely beyond current experimental capabilities” and recommended the ICF program focus on “acquiring information at the current scales to justify cost, scope, and schedule for any future investments in experimental capability.”

However, NIF reported this week that it recently produced a fusion reaction that generated 1.3 megajoules of energy from 1.9 megajoules of input laser energy, or about 70% of the threshold for achieving ignition. The experiment substantially exceeded expectations, as the facility’s previous record was 170 kilojoules, though NIF has yet to reproduce the latest results.

The House report, which was released in July, highlights the “aging nature” of the ICF program’s facilities and accordingly directs NNSA to provide Congress with a “strategic plan for recapitalizing, upgrading, and maintaining” the facilities that includes cost and schedule estimates.

Stockpile Responsiveness Program. NNSA’s recently created Stockpile Responsiveness Program provides nuclear weapons scientists and engineers with opportunities to exercise a greater range of skills than those afforded through the Stockpile Stewardship Program, which focuses on maintenance of warheads rather than design and production. The House and Senate both propose to slash the Stockpile Responsiveness Program’s budget from $70 million to $10 million, without offering a direct explanation for the cut. The House does state it is unsatisfied with how NNSA has proposed to implement a requirement that it annually provide Congress a detailed accounting of the program’s activities, which currently include a design competition for a potential new nuclear warhead and efforts to identify alternative manufacturing techniques for weapons components.

Assessment Science. Both the House and Senate propose holding funding for the Assessment Science program level at $769 million, whereas the administration requested a 10% cut. Both would also provide level funding for all major subprograms, including $216 million for Enhanced Capabilities for Subcritical Experiments, which is developing a major new capability for rapidly imaging plutonium implosions.

Academic Programs. The budget for NNSA’s program that develops partnerships with Minority Serving Institutions would increase by $5 million to $40 million under both the House and Senate bills, exceeding the administration’s request for level funding. The Senate also proposes to double funding for the Tribal Education Partnership program to $10 million, while the House matches the request for level funding. 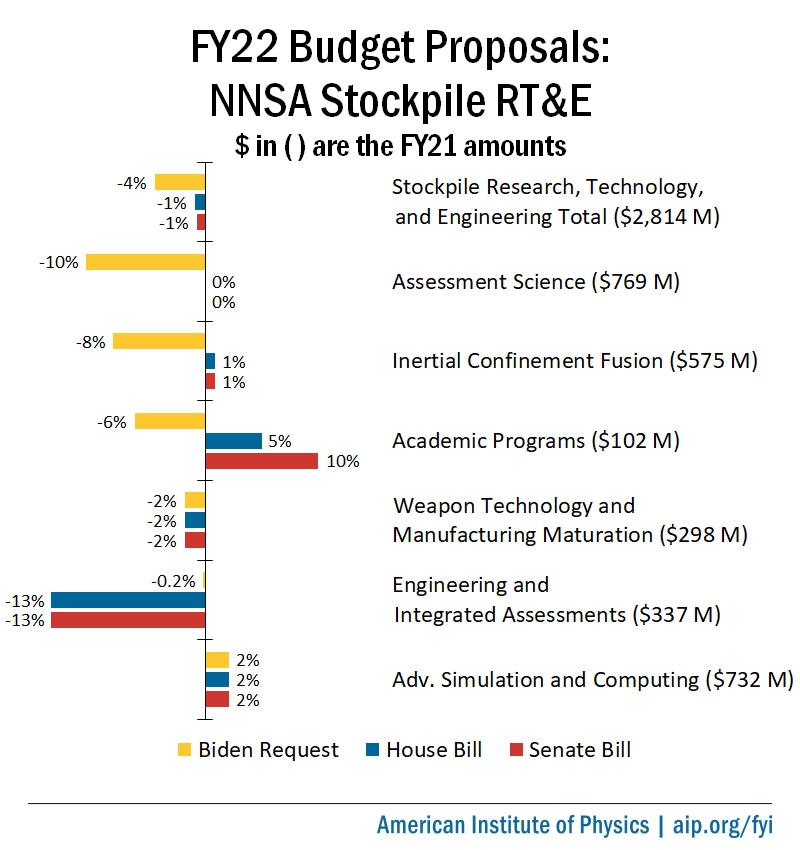 Both the House and Senate match the administration’s request to ramp up funding for projects at Los Alamos National Lab and the Savannah River Site that will manufacture plutonium cores for nuclear weapons, known as “pits.” Funding for the Los Alamos project is set to increase by 21% to $1 billion and for the Savannah River project by 37% to about $600 million.

However, both the House and Senate also raise concerns about NNSA’s plans for scaling up plutonium production. The agency recently disclosed that the Savannah River project will not meet its target of producing 50 pits per year by 2030 and that the high-end cost estimate for the project has increased from $4.6 billion to $11.1 billion.

The House notes that the plutonium production projects could siphon resources from science programs and asks the administration to consider the matter in its Nuclear Posture Review, which is now underway:

In conducting this review, the administration is encouraged to appropriately value the role of science and technology in sustaining the stockpile without the need for testing, which is too often marginalized in budget requests. The [Appropriations] Committee is concerned that the focus on refurbishing and building new warheads, along with the plutonium pit production mission, has resulted in significant downward pressure on other critical activities within Defense Programs, including science and infrastructure. Continuing this unbalanced funding strategy is not sustainable.

Meanwhile, the Senate notes it has yet to receive a congressionally mandated 10-year plan for research on plutonium aging, which will inform how fast existing plutonium pits in the stockpile must be replaced. The Senate report states the Appropriations Committee “will be unable to continue to support” the plutonium production program unless it receives the plan.

To help support the workforce necessary for pit production, the House specifies $10 million go toward relevant “collaborations between research universities and national laboratories,” including a research center focused on “lifetime extension and materials degradation issues.” It also directs NNSA to allocate at least $10 million to pit production workforce development partnerships with Historically Black Colleges and Universities, Hispanic Serving Institutions, and Tribal Colleges and Universities in South Carolina and New Mexico.

Nonproliferation R&D. The Senate matches the administration’s request to increase the Nonproliferation R&D budget by 12% overall to $673 million, while the House seeks a higher increase to $715 million. Funding above the request from the House would go toward advancing “space-based capabilities to detect nuclear detonations” as well as increasing the Nonproliferation Stewardship Program budget from $60 million to $100 million. The administration and Senate seek $87 million for the program, which supports efforts to develop the foundational technical capabilities and workforce needed to address emerging proliferation threats.

The House also proposes level funding of $20 million for a program that is exploring alternatives to powering naval vessels with highly enriched uranium (HEU). Both the administration and the Senate propose terminating the program without offering an explanation, though the Navy and DOE have previously stated that a low-enriched uranium fuel would be impractical and costly.

Nuclear forensics. The House notes it is awaiting a congressionally mandated report on planning for a “nuclear materials processing test bed capability to address proliferation concerns within the evolving civilian nuclear fuel cycle.” It notes NNSA has also yet to submit a related report that evaluates the “potential mission need and benefits of establishing a low-background radiation laboratory capability with access to Category I special nuclear materials representative of both weapons and commercial uses to support activities such as accelerator-based photonuclear, neutron activation, chemistry and isotope separation, treaty verification, and technical capabilities enabling emergency response.”

Mo-99. Both the House and Senate accept the administration’s request to sunset funding for cooperative agreements with companies that are developing HEU-free domestic sources of the medical radioisotope molybdenum-99. NNSA reported in its budget request that it anticipates funds Congress provided last year will be sufficient for continuing activities and estimated that at least two companies will be able to produce Mo-99 in the U.S. by the end of 2023.