The National Oceanic and Atmospheric Administration’s $5.4 billion annual budget will jump by close to 20% for fiscal year 2022 if either the House or Senate’s version of appropriations legislation is enacted. NOAA will also begin to receive its nearly $3 billion allocation from the special infrastructure bill just approved by Congress, and it could see billions more from the reconciliation bill currently under debate.

The fiscal year 2022 appropriations bills advanced by the House and Senate propose to increase the National Oceanic and Atmospheric Administration's current $5.4 billion budget by about $1 billion, short of the $1.5 billion increase requested by the Biden administration. All major NOAA offices would benefit from the increases, with the research office receiving a particularly large share as a proportion of its budget.

The bills are accompanied by explanatory reports from the House and Senate Appropriations Committees that contain policy direction for selected NOAA programs. Highlights from the reports are summarized below, and summary figures are available in FYI's Federal Science Budget Tracker. 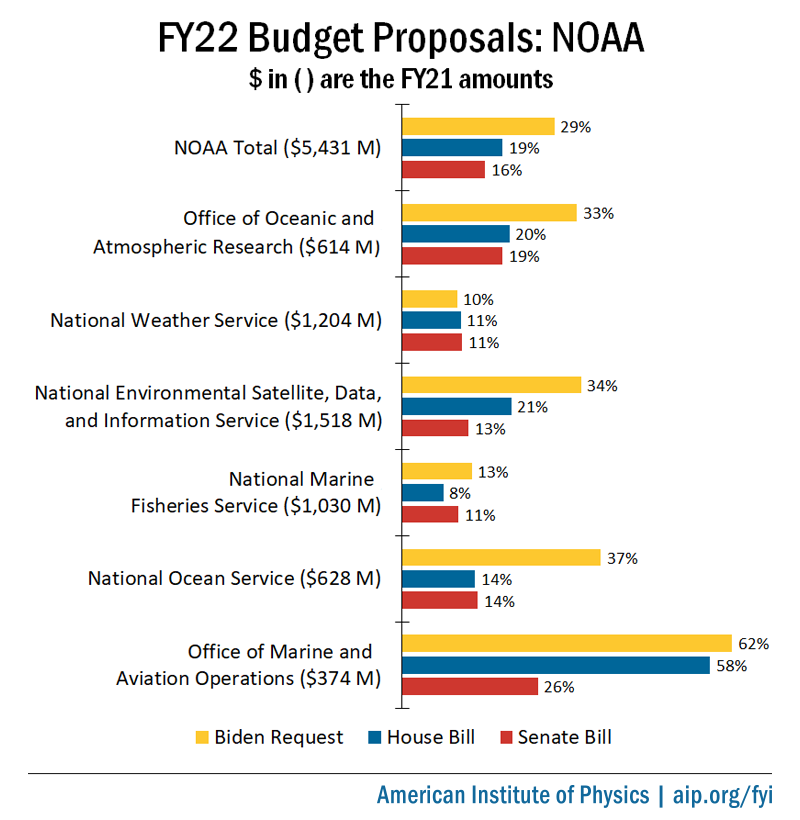 Outside of the regular appropriations process, NOAA will receive additional funding through special spending legislation. The Infrastructure Investment and Jobs Act that Congress just passed will provide nearly $3 billion for NOAA across five years, allocated mostly to environmental protection and restoration activities. The latest version of House Democrats’ Build Back Better Act, which they aim to pass using Congress’ reconciliation process, would provide a further $9.2 billion over five years, of which $860 million is split between research grants, data and computing infrastructure, and climate education and services.

Through the data and research-related funds in the infrastructure bill, NOAA will receive $492 million for coastal and inland flooding mapping and forecasting, $100 million for wildfire observations and predictions, $80 million for research supercomputing infrastructure, and $26 million for a soil moisture and snowpack monitoring network.

Within the research-focused funding in the reconciliation bill, $200 million would be for “improvements in research, observation systems, modeling, forecasting, assessments, and dissemination of information to the public as it pertains to ocean and atmospheric processes related to weather, coasts, oceans, and climate.” A further $200 million would be split evenly between competitive grants related to climate research and activities that support public literacy in STEM or the “increased development and dissemination of climate science information, products, and services, in support of climate adaptation preparedness.” An additional $20 million would be specifically for efforts to “improve the public understanding of climate change.”

The Build Back Better Act also includes some funds specifically for infrastructure: $200 million would be provided for purchasing high-performance computing capabilities, $139 million for acquiring hurricane observation aircraft, and $100 million for infrastructure that “improves accuracy, timing, and dissemination of public information concerning extreme climate and weather.”

In their regular appropriations bills, the House and Senate each propose to increase the current $614 million annual budget of NOAA’s Office of Oceanic and Atmospheric Research by around 20%. Much of the funding is directed to maintaining and expanding observational networks, bolstering climate adaptation and resilience programs, and supporting weather research programs. 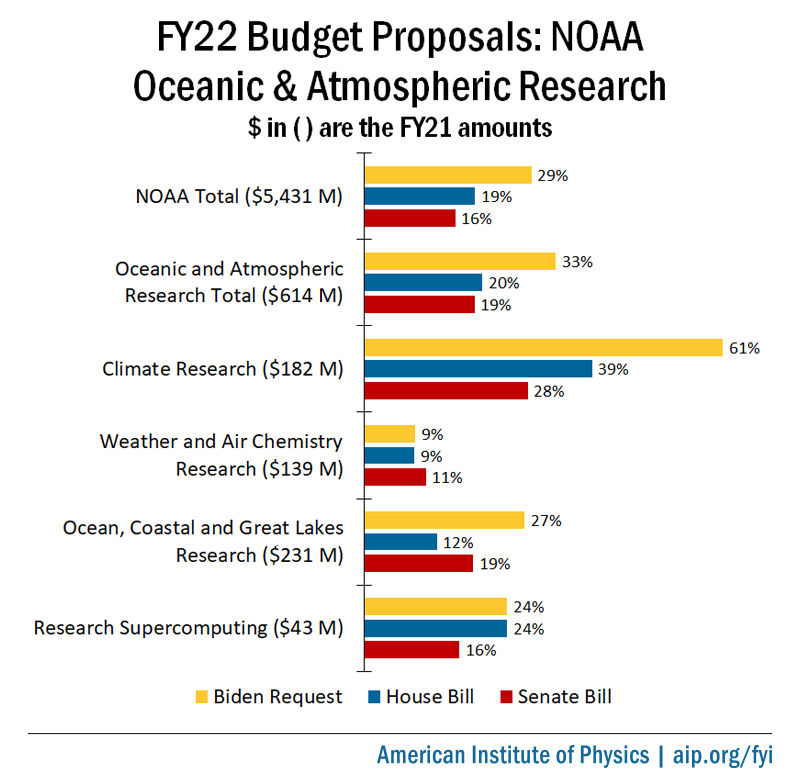 Climate research. The $182 million budget for the Climate Research account would increase by $71 million under the House bill and by $51 million under the Senate bill. Both bills would distribute the additional funding across the agency’s labs and cooperative institutes, regional climate information programs, and Climate Competitive Research program, which issues grants to NOAA labs and external institutions.

In their reports, House and Senate appropriators note the aging of the U.S. observatories that provide baseline measurements of atmospheric greenhouse gas concentrations. Accordingly, the Senate allocates $20 million above the fiscal year 2021 enacted level to “rebuild and enhance regional greenhouse gas observing systems by increasing the number of sites, the number of samples per site, and the temporal resolution,” while the House specifies an increase of at least $4.5 million to “ensure measurement integrity and safety of the observatory facilities.” The Senate also notes that some of the sites are “vulnerable to natural hazards, such as volcanic eruptions,” and encourages NOAA to develop plans for maintaining continuity of observations.

Both the House and Senate endorse the administration’s proposal to greatly expand the Regional Integrated Climate Sciences and Assessments program, which offers tailored climate risk information to state and local decision-makers. The Senate matches the requested $10 million increase while the House specifies a total of $25 million, noting it is $3 million above the request. NOAA plans to use a portion of the funds to launch a Climate-Smart Communities Initiative that would help train 20 cities around the U.S. in resilience-building. The Senate recommends NOAA also consider establishing a cooperative institute focused on coastal resilience and adaptation.

The House directs NOAA to spend $11 million on efforts to model and assess Earth’s radiation budget, $2 million more than Congress specified last year, while the Senate states NOAA should spend no less than the currently enacted level. Both reports specify that the funds be used to study “the impact of the introduction of material into the stratosphere from changes in natural systems, increased air and space traffic, and the assessment of solar climate interventions.” The Senate report also encourages NOAA to develop an interagency program with the White House Office of Science and Technology Policy to “manage near-term climate hazard risk and coordinate research in climate intervention and to coordinate with NASA for long-range manned and autonomous in-situ atmospheric observational capabilities.”

Weather research. The $139 million budget for the Weather and Air Chemistry Research account would increase by $12 million under the House bill and $15 million under the Senate bill. Both specify that NOAA allocate $2 million of the increase to its labs and cooperative institutes, $7 million to the U.S. Weather Research Program, and the remainder to tornado research and phased-array radar development.

Within the increase for the U.S. Weather Research Program, the Senate directs that $5 million go toward a subseasonal-to-seasonal research program to “seed innovative research testbeds.” As part of this effort, NOAA is directed to establish a pilot project for subseasonal-to-seasonal precipitation forecasts for water management in the western U.S. that is focused on “achieving measurable objectives for operational forecast improvement, including forecasts of seasonal mountain snowpack accumulation and total seasonal precipitation.” Separately, within the Climate Research account, the Senate provides $10 million above the currently enacted level to “develop a global, high-resolution atmospheric model with at least a three-kilometer resolution to improve understanding and prediction of climate-driven, extreme weather events.”

The Senate also directs NOAA to spend no less than the current amount on its Earth Prediction Innovation Center, a nascent effort to create a code development sandbox that helps external researchers contribute to NOAA’s models. The House does not specify a budget for the center, and the administration did not make a specific budget proposal for it, to the disappointment of some lawmakers. Last year, Congress directed NOAA to spend no less than $13 million on the center.

Expressing concern about the increasing severity of wildfires, the House allocates $15 million to “fully support fire weather initiatives across NOAA” and directs the agency to assess the need for more incident meteorologists for wildfires. The Senate similarly “notes with urgency the importance of improving fire weather modeling, prediction, detection, and decision support tools,” providing not less than $2 million above the currently enacted level for such efforts within the U.S. Weather Research Program. 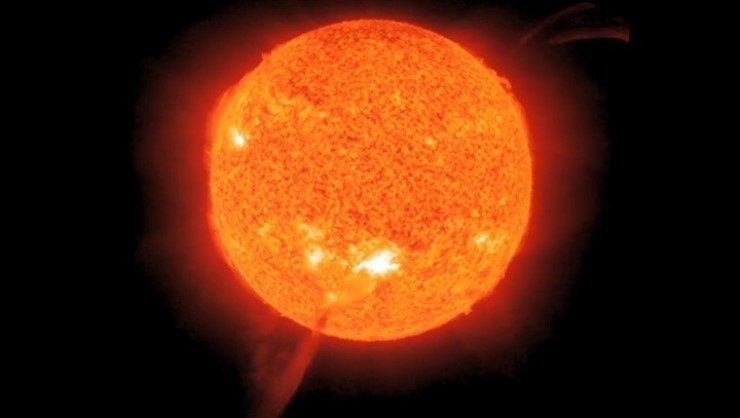 The National Environmental Satellite, Data, and Information Service (NESDIS), which manages the acquisition of weather satellites, would see its budget increase from $1.5 billion to $1.8 billion under the House bill and to $1.7 billion under the Senate bill, falling short of the request for an increase to $2 billion. NOAA pledged to not ask for more than inflationary increases above that level in future years, stating that within a stable budget of $2 billion it would make “trade-offs within and between observation portfolios to avoid cost growth.”

Budget restructure. The House accepts NOAA’s proposal to consolidate several budget lines into accounts organized around geostationary satellites, low-Earth orbit satellites, and space weather observations. The agency argued in its budget request that the inflexibility of the current structure leads to higher acquisition costs “due to an inability to balance risks across observation sets.” However, the Senate partially rejects the proposal, stating as one of its reasons, “No amount of assurances regarding additional transparency or oversight can substitute for the transparency that is provided by having discrete [accounts] for each ongoing program of record.”

Space weather monitoring. NOAA is currently developing new platforms to monitor solar winds and coronal mass ejections. The Senate meets NOAA’s request to ramp up the budget for the Space Weather Follow On program from $108 million to $147 million. The program will place a solar observatory at the L1 Lagrange point as well as a compact coronagraph on a geostationary satellite, replacing capabilities currently provided by the Solar and Heliospheric Observatory (SOHO) and Deep Space Climate Observatory (DSCOVR) spacecraft, which are past their design lifetimes. The Senate also provides the $55 million requested to establish a Space Weather Next program that will work to provide additional observational coverage. Rather than specify program-level amounts, the House broadly allocates a total of $204 million for space weather observations, in accord with NOAA’s request for more budget flexibility. The House also notes it supports the continuing operation of DSCOVR through 2023, stating the mission is “critical to the accuracy and lead time of NOAA’s space weather alerts and forecasts.”

Office of Space Commerce. Senate appropriators propose to double funding for the Office of Space Commerce to $20 million but state that they are “extremely disappointed” with the “seemingly little progress” it has made in implementing a space traffic management pilot program Congress mandated in its last appropriation. They also question NESDIS’ ability to manage the office, recommending it instead report directly to the NOAA administrator, and they propose to withhold certain management funds until the agency submits a five-year strategic plan for the office. The House proposes level funding for the office.

Earmarks. This is the first budget cycle since 2011 in which appropriators have permitted earmarks that are explicitly for particular projects. House appropriators earmark $24 million to fund 30 projects, while their Senate counterparts earmark $64 million for 55 projects. The earmarked projects span educational initiatives, coastal and fisheries resiliency and restoration activities, climate and weather research, and diversity and inclusion efforts.

Hurricane Hunter aircraft. The House meets NOAA’s request for $100 million to purchase an additional aircraft for its fleet of P-3 Hurricane Hunters, which the agency deploys to gather observations inside of hurricanes, while the Senate only includes $5 million for maintenance of the two Hurricane Hunter aircraft currently in operation. The Senate explains it will only consider additional aircraft investments if it receives an updated procurement plan from NOAA that includes cost estimates. In its budget request, the agency noted it is statutorily required to maintain a backup aircraft and that its current backup is owned by another agency and lacks certain data collection systems.

Education programs. The House matches the agency’s request to increase the Office of Education budget by $8 million to $41 million, while the Senate proposes $39 million. Both allocate $2 million of the increase to the José Serrano Educational Partnership Program with Minority Serving Institutions. House appropriators also encourage NOAA to “prioritize improving Americans’ understanding of climate change, including providing formal and informal learning opportunities to individuals of all ages, including individuals of diverse cultural and linguistic backgrounds, emphasizing actionable information to help people understand and promote the implementation of new technologies, programs, and incentives related to climate change, climate adaptation and mitigation, and climate resilience.”