National Science Board Weighs In on State of US Science

A new report from the National Science Board finds that the U.S. has continued to lose its clear leadership position in global science and engineering. Accordingly, the board recommends the nation position itself as an international hub for scientific collaboration and take urgent action to strengthen the domestic STEM workforce. 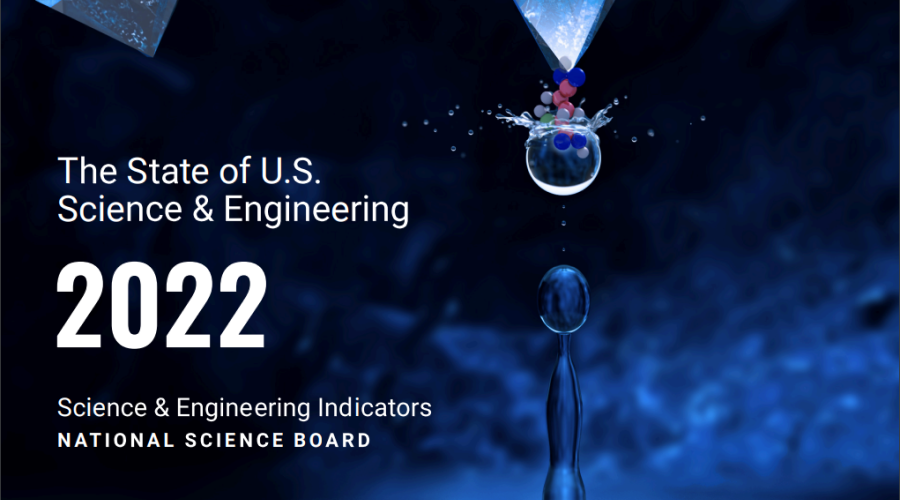 Cover image for the National Science Board’s new report on “The State of U.S. Science and Engineering.”

The National Science Board released a report last week that highlights changes in U.S. R&D performance and the composition of the country’s STEM workforce. Drawing on statistics gathered by the National Science Foundation, it charts how the U.S. share of global R&D expenditures and research outputs such as publications has continued to decrease as other countries — most particularly China — have built up their research enterprises.

In a policy brief accompanying the report, the board argues it is no longer feasible for the U.S. to lead “across-the-board” in science and engineering, and that the U.S. should therefore position itself as a hub for international talent and work to influence values and norms for the conduct of research. The board also stresses the need to strengthen the domestic STEM workforce by addressing longstanding disparities.

Congress mandates that the board, which oversees NSF, biennially produce policy-neutral statistics on the national R&D enterprise, a compilation known as the Science and Engineering Indicators. Seeking to provide more timely and focused updates, in 2020 the board shifted from releasing the entire compilation at once to publishing a rolling series of thematic reports, which cover topics such as the STEM workforce, science education, the state of academic R&D, and publications output.

The new report notes that the U.S. continues to lead the world in annual R&D spending, with total expenditures from both public and private sources increasing to $656 billion in 2019. However, total global R&D spending has tripled over the past two decades, with much of the growth driven by China and other Asian countries. Accordingly, the U.S. share of global R&D fell from 37% in 2000 to 29% in 2010 to 27% in 2019, while China’s share increased from 5% to 15% to 22%.

The five percentage-point gap between U.S. and China R&D expenditures in 2019 is significantly larger than the two percentage-point gap in 2017 that was presented in the 2020 edition of the report. The new report attributes the change to a recent revision of the World Bank’s purchasing power parity estimates, a tool that enables direct comparisons of expenditures between countries. 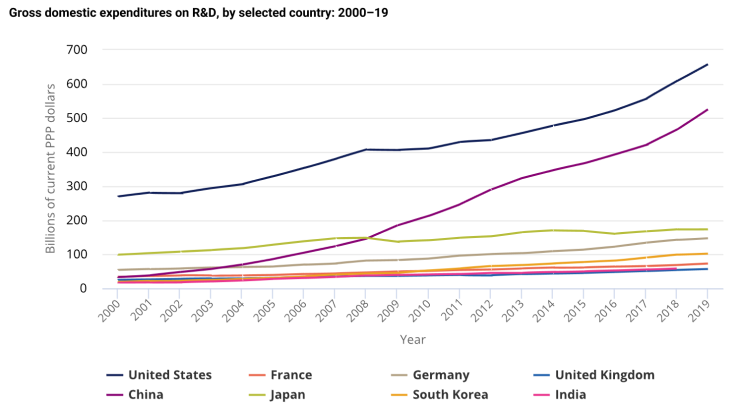 The U.S. continues to lead global spending on basic research with annual expenditures of roughly $100 billion, which is about quadruple the amount spent by China. Other countries, such as France, spent a higher proportion of R&D funds on basic research, but none surpass China or the United States in absolute amounts. China and the U.S. spend similar dollar amounts on experimental development, which encompasses efforts “directed to producing new products or processes.”

Much of the growth in R&D spending has been driven by private-sector activity, which now accounts for more than 60% of all R&D expenditures among the top-spending countries. In the U.S., both the private sector and the federal government increased R&D spending between 2010 and 2019, but the federal proportion of the total dropped from 31% to 21% during that time.

The private sector’s activities are heavily concentrated in experimental development and applied research, though it has expanded its work in basic research in recent years and accounted for 30% of the national total in 2019. However, the federal government remains the largest funder of basic research in the U.S., accounting for 41% of the total.

The report also examines trends in other measures of scientific activity, which largely correlate with the trends in spending. For example, the share of international patents granted to inventors in the U.S. and other high-income countries declined over the last decade, while China’s share increased from 16% in 2010 to 49% in 2020.

In addition, China and India have continued to increase their output in “knowledge- and technology-intensive industries,” a metric that tracks the translation of science and engineering (S&E) capabilities into the marketplace. China surpassed the U.S. in total manufacturing output of these industries in 2011, though the U.S. continues to lead in services such as information technology as well as the production of aircraft, medical equipment, and pharmaceuticals.

Board seeks ‘keystone’ role for US

Given all these trends, the board concludes in its policy brief that the U.S. “no longer leads by default” and advocates for it to instead position itself as a “keystone” in the global R&D ecosystem. It elaborates,

What does it mean to be a keystone of global S&E? It means strengthening international collaborations and engagements, not withdrawing from them. It means being a dependable partner and responsibly fostering open exchanges of ideas and people across fields, public and private sectors, and borders. It means being a hub of the worldwide S&E talent flow.

The report itself highlights the increasing prevalence of international scientific collaborations and exchanges of talent. It notes that the share of U.S. publications with international coauthors increased from 19% in 2000 to 40% in 2020, and that U.S. scientists contributed to 35% of global publications with authors from multiple countries in 2020.

In addition, it notes that foreign-born workers accounted for 19% of the U.S. STEM workforce in 2019, including 45% of workers in doctorate-level occupations. The U.S. continues to attract more international students than any other country, though it states the number of international students enrolled in U.S. STEM degree programs declined by roughly 20% between 2019 and 2020 due to the coronavirus pandemic.

While the report notes the fraction of such graduates that intend to remain in the U.S. after graduation has remained higher than 75% over the past decade, the policy brief asserts that the country’s ability to attract and retain scientific talent should not be taken for granted. It urges the U.S. government to maintain a “clear, consistent, and predictable visa system, and ensure that those who come here feel welcome and secure.”

‘Missing millions’ seen as key weakness for US

The vitality and diversity of the domestic STEM workforce is a major concern for the board, which in its policy brief highlights the “missing millions” of members stemming from the underrepresentation of women and Black, Hispanic, and Indigenous people across fields.

The report finds that demographic trends differ across occupational categories. Women make up 44% of the roughly 16 million STEM workers with at least a bachelor’s degree, up from 42% in 2010, but they represent only 26% of the “skilled technical workforce,” a phrase the board uses to describe the nearly 20 million STEM workers without a bachelor’s degree. In contrast, Black and Hispanic workers are better represented within the skilled technical workforce, with participation rates similar to their proportion in the general workforce, but they remain underrepresented in occupations that require higher educational levels. 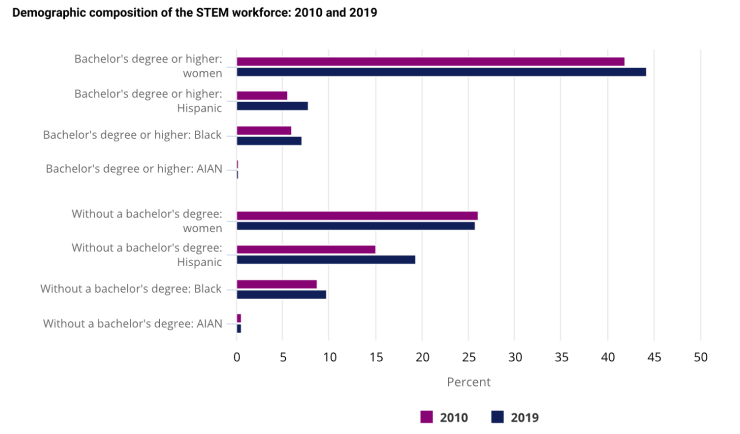 These trends mirror underlying disparities in STEM education at the K–12 level. The report notes that teacher qualifications vary across student demographic groups and U.S. regions, with less experienced teachers more prevalent in schools with high-minority or high-poverty populations. It also connects socioeconomic barriers, such as the high cost of four-year colleges, to educational and workforce disparities at higher levels.

“College cost, coupled with insufficient information about the labor market demand for STEM skills in a wide range of jobs, deter undergraduates from starting and/or completing STEM degrees. … A disproportionate number of individuals from missing-millions racial and ethnic groups have little to no intergenerational wealth to draw on for their educational goals,” the brief states.

“To ensure that all Americans can participate in and benefit from the S&E economic engine, the U.S. must invest in public K–12 and post-secondary STEM education in every state and strategically develop capacity by establishing innovation hubs across the country,” it concludes.