Congress increased funding for the National Institute of Standards and Technology by nearly 20% to $1.2 billion for fiscal year 2022, but most of the money is earmarked for university-based projects tangential to the agency’s mission. The increase shrinks to 3% after all earmarks are subtracted.

For fiscal year 2023, the Biden administration has requested an increase to just under $1.5 billion, which is nearly 40% above the budget excluding earmarks and is similar to the amount the administration requested last year. The increase is among the highest sought in percentage terms across all science agencies, reflecting NIST’s links to administration priorities in areas such as emerging technologies and advanced manufacturing.

In addition, NIST is poised to steward billions of dollars for semiconductor R&D if Congress reaches agreement on pending legislation to fund the CHIPS for America Act. Under the present structure of the legislation, these funds would be provided over several years outside of the annual budget process as a mandatory appropriation.

Congressional direction for fiscal year 2022 is included in an explanatory statement accompanying the appropriations legislation, as well as in a report prepared by House appropriators. Summary figures for the appropriation and the request are compiled in FYI’s Federal Science Budget Tracker. 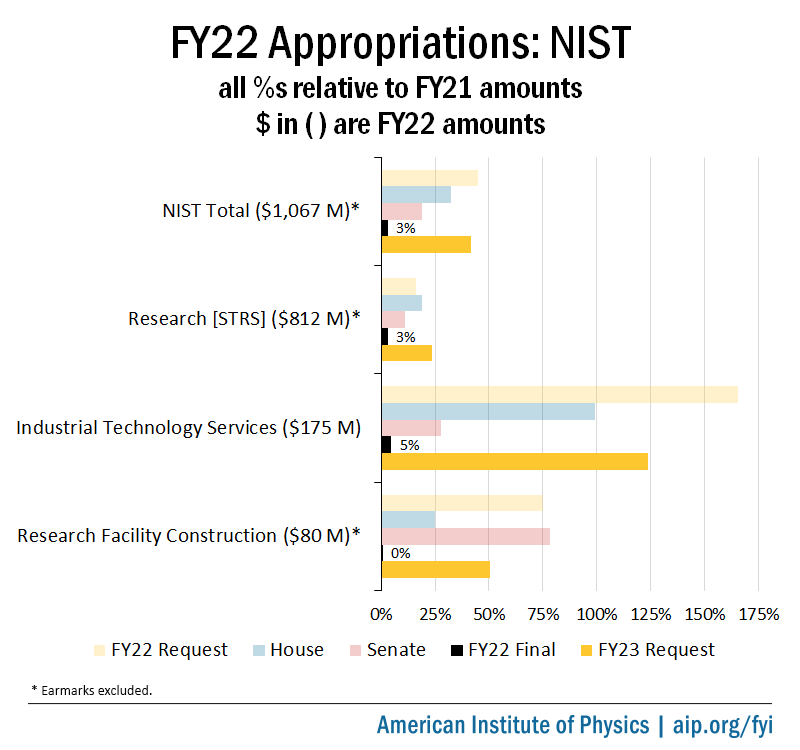 Congress brought back earmarks during the fiscal year 2022 budget cycle after a decade-long moratorium. A catalogue of earmarks across science agencies has been compiled by the American Association for the Advancement of Science.

The NIST appropriation earmarks $163 million for 27 university-based projects. A few are directly relevant to the agency, such as $1 million for laboratory equipment at JILA, an institute NIST supports at the University of Colorado. However, many of the largest projects are not.

In allocating the funds, Congress directs NIST to “perform the same level of oversight and due diligence as with any other external partners.” 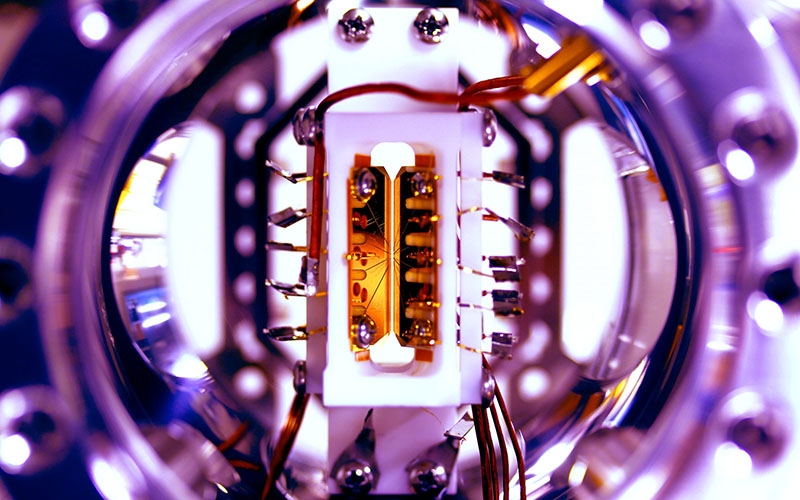 Excluding earmarks, the account that funds NIST’s research programs is increasing by $24 million to $812 million for fiscal year 2022. Congress directs the agency to maintain at least level funding for a variety of priority areas, such as quantum information science, artificial intelligence, semiconductors, advanced communications, greenhouse gas monitoring, and disaster resilience.

The administration now seeks to increase the account to $975 million, proposing a suite of new initiatives in each of these priority areas and more. Outcomes and proposals for specific activities are summarized below.

QIS and AI. Congress directs NIST to spend no less than $49 million on QIS and no less than $31 million on AI, roughly level with their current funding, and the administration now requests a $15 million increase for each area. NIST states a key barrier to progress in QIS is “a lack of quantum engineering capabilities for U.S. researchers to create, test, and validate potential platforms more rapidly.” Accordingly, it proposes to expand its quantum networking testbed program, addressing priority research areas identified in a recent interagency report. It also proposes to establish a program that would develop new quantum materials and associated neutron-based measurement technologies. For AI, NIST would establish “testbeds for regular benchmarking and evaluation of AI systems” and expand research that helps improve the trustworthiness of AI applications.

Climate and clean energy. Congress allocates a $2.5 million increase above current levels for NIST’s climate and energy measurements, tools, and testbeds portfolio, with up to $1 million specifically for wildfire preparedness research. It also encourages NIST to expand research on carbon dioxide removal and sequestration, and it repeats direction from last year requiring the agency to help identify “authoritative” climate projection information for use in updating building codes. The administration requests a $20 million increase for this portfolio for fiscal year 2023 to expand work related to extreme weather resilience, smart grids, and greenhouse gas monitoring in urban settings.

Workforce diversity. Congress allocates steady funding of $11.5 million for STEM workforce diversity efforts, and the administration requests a $6 million increase for fiscal year 2023. NIST states it would use the new funds to hire postdoctoral fellows from underrepresented backgrounds through a new program analogous to its longstanding fellowship program run in partnership with the National Academies.

Standards initiatives. The administration requests $8 million for a new initiative to improve U.S. preparations for international standards-setting negotiations for emerging technologies, a topic of growing interest among lawmakers. The initiative would aim to reinforce the country’s current private sector-led approach, with a focus on standards related to AI, QIS, biotechnology, privacy, advanced manufacturing, and advanced communications. Specifically, NIST proposes to cultivate a cohort of “standards liaisons” within the federal government and to establish a competitively-awarded Standards Center of Excellence that would convene workshops with various stakeholders.

Separately, the administration requests $8 million to modernize NIST’s standards-delivery processes, in part by digitizing certain services through a “metrology cloud.” The funds would also help address shortages in reference materials, with NIST stating about 30% of its inventory is currently restricted as it struggles to meet demand for new materials while also maintaining legacy ones.

Advanced communications. The administration requests $12 million to launch R&D programs that would produce data and methodologies to inform future spectrum auctions, such as those for as-yet-undeployed 6G systems. Separately, it requests $10 million to continue a program that develops communications technologies for emergency response personnel, which presently is funded through a mandatory appropriation account that expires in fiscal year 2022. NIST states the funds would allow it to maintain a “robust core program,” but acknowledges the current scope of activities would be “significantly reduced.”

Invention reporting. NIST requests a $2 million increase for its efforts to modernize iEdison, the official web portal for reporting inventions developed at federal agencies. NIST is assuming responsibility over the portal from the National Institutes of Health, and it states the goal is to have the system be capable of hosting data from all federal agencies by 2025. The new system will aim to increase reporting compliance and enable better tracking of outcomes such as patents and whether resulting products are being manufactured domestically or abroad. 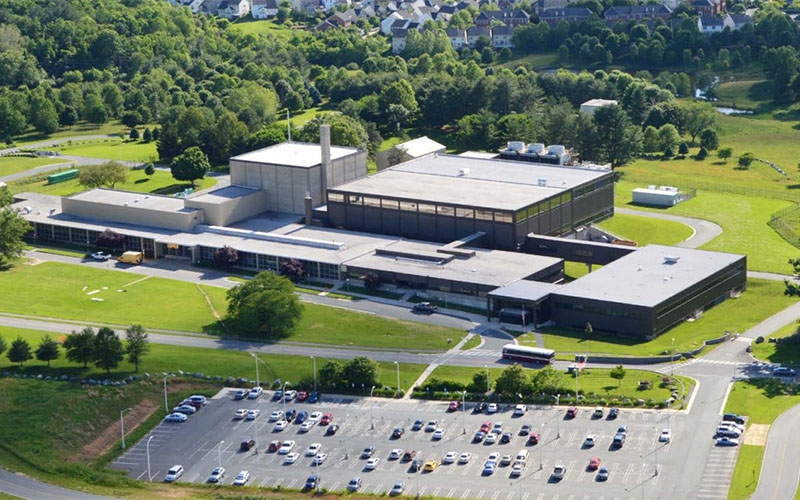 The NIST Center for Neutron Research in Gaithersburg, Maryland. In this photo, the reactor’s confinement building can be seen at the back left of the center. (Image credit – NIST)

Reactor restart. Congress states the fiscal year 2022 appropriation includes “sufficient funding” to address costs associated with restarting the reactor at NIST’s Center for Neutron Research (NCNR), which has been offline since February 2021 when an operator error caused a radiation incident. Appropriators chide NIST for the “lateness” in its communication of the accident to Congress and direct the agency to detail how it could cover the costs using “unobligated balances and prior-year recoveries first prior to proposing reductions to programmatic efforts.” They also encourage NIST to engage with the research community to assess future needs for neutron-scattering reactor infrastructure, noting the NCNR reactor is more than 50 years old.

Though NIST and the Nuclear Regulatory Commission have concluded the public was not endangered by the incident, the reactor incurred significant damage and NIST must also implement training and oversight reforms before the NRC will permit the reactor to resume operation. In an inspection report released last month, NRC raised concerns about the adequacy of NIST’s initial set of corrective actions, which suggests a quick restart may be unlikely.

NIST’s budget request for fiscal year 2023 includes $10 million for restart costs, of which $8 million is for physical repairs and the remainder is for expanding reactor operations staffing, training, and oversight. NIST states that if its recovery efforts are successful, the reactor will be "technically ready to restart this fiscal year.”

Facility maintenance. NIST estimates its overall facilities maintenance and modernization backlog stands at $834 million, with critical infrastructure failures now “increasing exponentially.” The agency reports widespread issues with IT networks, electrical and mechanical systems, and water piping, including an issue at its Maryland campus that is causing tens of thousands of gallons of water to be lost each day.

Though NIST described these issues in similarly dire terms in its previous budget request, Congress provided flat funding of $80 million for the facility construction account for fiscal year 2022. The latest budget request proposes a 50% increase to $120 million for the account. Among the planned projects beyond upgrading utility infrastructure are to address deferred maintenance in the NCNR building, to take advantage of the present reactor shutdown.

Both the House-passed America COMPETES Act of 2022 and the Senate-passed U.S. Innovation and Competition Act would appropriate $52 billion over five years for domestic semiconductor manufacturing and R&D initiatives authorized a year ago by the CHIPS for America Act.

Almost all the money is slated for the Commerce Department, which houses NIST. Some of the funds are specifically allocated to NIST, and the department could delegate further responsibilities under the legislation to NIST. The scope of the funds may also change considerably during negotiations over the final legislation, which Congress aims to wrap up this year.

The CHIPS for America Act directs NIST to establish an Advanced Packaging Manufacturing Program and to maintain a broad research program focused on advancing metrology for next-generation microelectronics. The pending legislation would provide $2.5 billion for the advanced packaging program and $500 million for the microelectronics research program in the first year of the initiative.

These programs would work in coordination with the National Semiconductor Technology Center, another major initiative authorized by the CHIPS Act. The center is envisioned as a public-private consortium overseen by the Commerce Department. Altogether, the center and the NIST programs would receive $11 billion over five years, and the funds would be available until expended.

In anticipation of NIST taking on a much larger role in semiconductor R&D, the budget request for fiscal year 2023 includes a nearly five-fold increase to $97 million for the agency’s contribution to the Manufacturing USA institute network. The funds would support four new institutes, at least one of which would be dedicated to semiconductor design and manufacturing. The administration made a similar proposal for fiscal year 2022, but Congress held NIST’s contribution flat for the year.