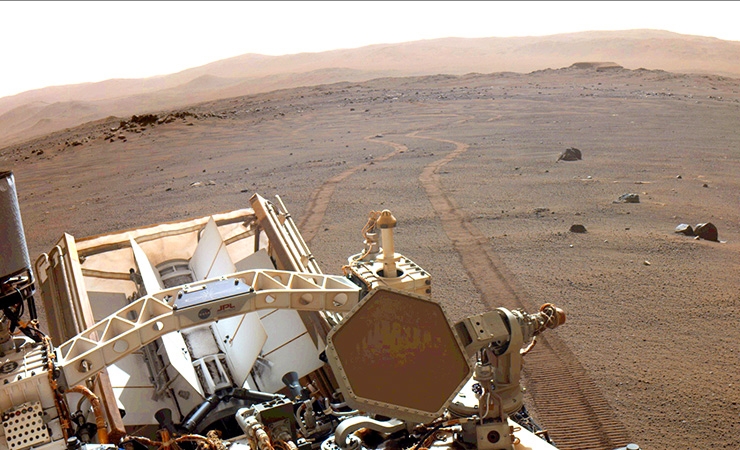 The Perseverance rover takes a look back at its tracks across the surface of Mars.

NASA Science Mission Directorate head Thomas Zurbuchen reported on Monday that the agency is reworking the architecture of its flagship Mars Sample Return (MSR) mission, a joint effort with the European Space Agency. Previously, the plan was to use a single lander to convey both an ESA-built rover that will retrieve cached surface samples and an ascent vehicle that will bring the samples into space. Now, two landers will be used.

According to Zurbuchen, a single lander that could carry both vehicles would have departed too far from established technologies, introducing unacceptable risk. He said the revised architecture would push the mission’s target launch date from 2026 to 2028, but did not indicate how the changes might affect the mission’s cost. He did note, though, that MSR will reach its next development milestone in June, at which point NASA is required to provide a revised cost estimate.

The MSR news follows ESA’s announcement on March 17 that it will not launch its ExoMars mission in September because it is suspending cooperation with Russian space agency Roscosmos, which built the mission’s lander and was providing its launch vehicle. ESA states it will now initiate a three-month “industrial study” to identify other options for conveying the mission’s centerpiece, the Rosalind Franklin rover, to Mars.

Unlike ExoMars, which is already built, MSR is still in its earliest phase of design and was not yet formally committed to a particular mission architecture. However, NASA has been intent on solidifying the mission’s design quickly, in view of costly disruptions that afflicted prior flagship missions when significant technical risks were allowed to persist into later phases of the development process.

To keep tabs on MSR’s progress, NASA set up an independent review board (IRB) in 2020. In its first report, delivered that November, the board urged NASA to pursue aggressive funding for early efforts to retire design risks. Accordingly, for fiscal year 2022 the agency asked Congress to increase the mission’s annual budget from $246 million to $653 million. Congress has just agreed, allowing NASA to allocate even more if it chooses, and MSR is now the largest development effort in the agency’s science portfolio.

Concerning the mission’s overall cost and schedule, the IRB questioned NASA’s optimism at that time, arguing the agency’s planned launch date in 2026 was “not compatible” with acceptable risk levels for a mission of MSR’s scale and importance. Noting the mission’s cost was still a “moving target,” the IRB further suggested the figure of about $3 billion NASA was using for planning purposes was too low and that development costs were likely to amount to between $3.8 billion and $4.4 billion.

The question of whether the mission would require one or two landers was already the subject of an ongoing study when the IRB conducted its review. The board cited the uncertainty surrounding the lander architecture as a key factor behind its advocacy for a higher overall cost estimate and a less aggressive schedule and recommended NASA place a strong emphasis on resolving the issue.

NASA seeks to minimize use of unproven technologies

MSR is following in the wake of a series of stunning successes NASA has recently chalked up on Mars. Earlier this century, the twin Spirit and Opportunity rovers exceeded their design lives by many years, and the Curiosity rover, which launched in 2011, continues to operate.

A year ago, the Perseverance rover landed in Mars’ Jezero Crater, an area once covered in water, and it has already cached 10 samples for MSR to retrieve. The Ingenuity helicopter, which arrived with Perseverance, has completed 22 flights. Having long since transcended its status as a technology demonstration mission, it is now actively assisting Perseverance’s science campaign.

Experience gained with these prior missions has allowed NASA to develop confidence in its technological approaches for robotic Mars exploration, including its “sky crane” method of landing on the surface. Although MSR’s multi-vehicle architecture brings unprecedented complexity, it is focused less than its predecessors on pushing technological boundaries and more on returning the cached samples as soon as possible without running unnecessary risks.

Zurbuchen cited this point in presenting the new plans for MSR, observing, “A large single-lander architecture would require a wider payload launch vehicle fairing to accommodate a wider entry heatshield diameter; unproven entry, descent, and landing capabilities; and electric propulsion on the cruise stage. … The dual-lander architecture builds off Perseverance success and can be completed in the 2020s.”

NASA will be responsible for building both landers, and it recently selected Lockheed Martin to construct the ascent vehicle that will transport retrieved samples from the surface into Mars orbit — the first-ever launch attempt from another planet. The samples will be delivered to the ascent vehicle by the ESA rover and ultimately transferred to an ESA-built orbiter, which will transport them to Earth.

Outlining a revised mission schedule NASA has worked out with ESA, Zurbuchen noted that with both landers launching in 2028, the retrieved samples are expected to arrive back at Earth in 2033. As before, ESA’s orbiter is slated to launch in 2027. 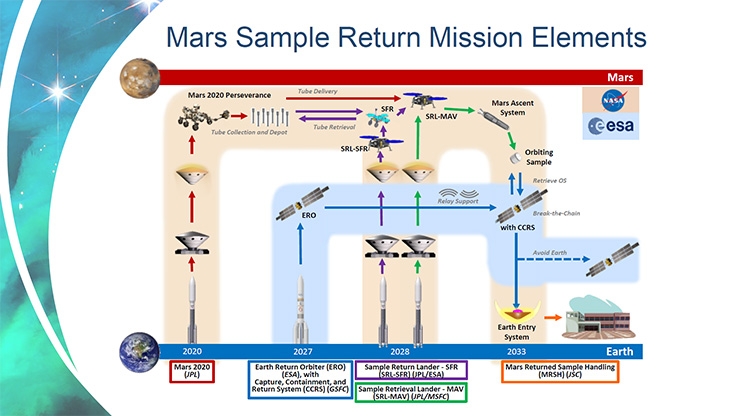 A slide showing the revised architecture and schedule for the Mars Sample Return mission.

ESA’s last attempt to conduct a surface mission on Mars ended in failure when its Schiaparelli lander crashed on arrival in 2016 as part of the otherwise successful ExoMars Trace Gas Orbiter mission. The Rosalind Franklin rover was scheduled to launch in 2020 as a second phase of ESA’s ExoMars program. However, delays during integration and testing caused it to miss that year’s launch window.

The next available opportunity for a short trajectory to Mars was this fall, and the rover and the Roscosmos-built landing platform were set to meet it without difficulty, launching from the Baikonur Cosmodrome in Kazakhstan. However, Russia’s invasion of Ukraine put an end to that possibility.

ESA explained, “As an intergovernmental organization mandated to develop and implement space programs in full respect with European values, we deeply deplore the human casualties and tragic consequences of the aggression towards Ukraine. While recognizing the impact on scientific exploration of space, ESA is fully aligned with the sanctions imposed on Russia by its member states.”

At a press conference following the announcement, ESA Director-General Josef Aschbacher remarked, “I have a lot of sympathy for those people who have been working on this project for decades. … I can understand the frustration of people both on the engineering side, the science side, and the community side. But let me also say, even if we launch later … the science that will be produced by this rover is still standing and first in the world.”

Addressing future plans, senior ESA official David Parker said the mission could potentially launch in 2024 should a resumption of cooperation with Roscosmos become possible. However, if the mission is reconfigured to replace Russian contributions, it would have to wait for launch opportunities in 2026 or even 2028.

Aschbacher noted it is possible ESA could turn to the U.S., which backed out from participating in the ExoMars program a decade ago. “Certainly cooperation with NASA is an option that we will look into. I would also like to take this occasion to mention that NASA has expressed its very strong willingness to support us, of course depending on the outcome of studies and decisions, in order to find a common way forward,” he said.