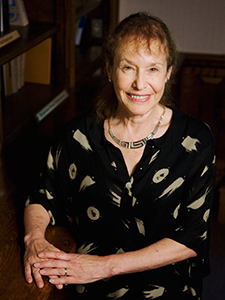 Stanford Ovshinsky and the Creation of the Nickel Metal Hydride Battery

In the 1960s, the self-educated inventor Stanford Ovshinsky pioneered the use of amorphous and disordered materials in phase-change switches and memories. He spent the next half-century developing such materials to "better the world," as he would say. His major goal was to use them to replace fossil fuel. One way was through the development and production of thin-film amorphous silicon solar panels.

This talk focuses on another technology, the rechargeable Nickel Metal Hydride battery. While Ovshinsky didn't invent the concept for such a battery, it was hydrogen-storing amorphous materials that made the battery work, and for a time it was widely used in many consumer products (like cameras and laptops). But from the beginning of his work on NiMH batteries, Ovshinsky aimed at using them in electric cars. That effort ended in the well-known debacle of the General Motors EV1, but Ovshinsky's Nickel Metal Hydride batteries are still used today in hybrid cars, like the Toyota Prius

Lillian Hoddeson is a Fermilab historian and Professor Emerita of History at the University of Illinois. After earning her Ph.D. in physics from Columbia University, she did early historical studies on the beginnings of industrial research at Bell Telephone Laboratories, which led to her work on the development of solid-state physics and the invention of the point-contact transistor. While at Fermilab, Hoddeson established an archive and a history program focused on particle accelerators and high-energy physics. She has conducted over 500 oral-history interviews and has introduced hundreds of students to the methods and theory of oral history in other fields such as sociology, policy studies, education, and anthropology. In 2012 she received the Abraham Pais Prize for the History of Physics "for her leadership and contributions to writing the history of twentieth-century physics, her pioneering studies of American research laboratories—particularly Bell Labs, Los Alamos and Fermilab—and her perceptive scientific biography of John Bardeen."