Recently, I moved to a new house. Moving is exhausting and stressful (and yet, I know the military kid in me will feel the overwhelming need to do it again in approximately 3 years). I still have a lot of unpacking to do, and I know I should probably spend my spare time working on the countless boxes of my belongings cluttering the house, but I ask you, readers: where is the fun in that? Instead, I find it is much more pleasing to focus on the things that could probably wait. For instance, what color should I paint my new bathrooms? And which frog pictures will best complement the paint color I choose (because the theme is frogs). Who really needs an organized kitchen, anyway?

I have gathered a small, but impressive, collection of the color sample squares from the paint section of my local Lowes. I get the same thrill selecting which particular squares I want that I did when I was like 8 years old (only this time I have a legitimate reason for taking them and my mom isn’t here to make me put them back). Then I fall into the routine of holding the squares up to my walls, and up to each other, every time I walk into one of the rooms I want to paint. Doing so brings me to lots of maybes, but, as of yet, no real decisions. Someday soon, I will probably need to choose. Anyway…

With color schemes and palettes so on my mind, I decided to learn a little more about the physics of color. Basically, the way I [kind of] understand it is this: on the electromagnetic spectrum, there are ranges of light not visible to the human eye (like x-rays, ultraviolet light, and infrared light). The range of light that the human eye can perceive is called the visible spectrum. When wavelengths of that light reflect off things, rather than being absorbed by them, we see colors! For instance, a leaf in summer absorbs almost all visible wavelengths of light except for green. Green light reflects off the leaf and enters our eyes, which is why we perceive it as green. I think that is about as far as my explanation goes (and I must include a thank you to my colleague Joanna Behrman for her help with said explanation), but if you want to learn more, this Physics in Motion video further breaks down how and why we perceive color. Next, I read this article by Rachel Nuwer from Smithsonian Magazine, which briefly describes why certain colors complement each other. 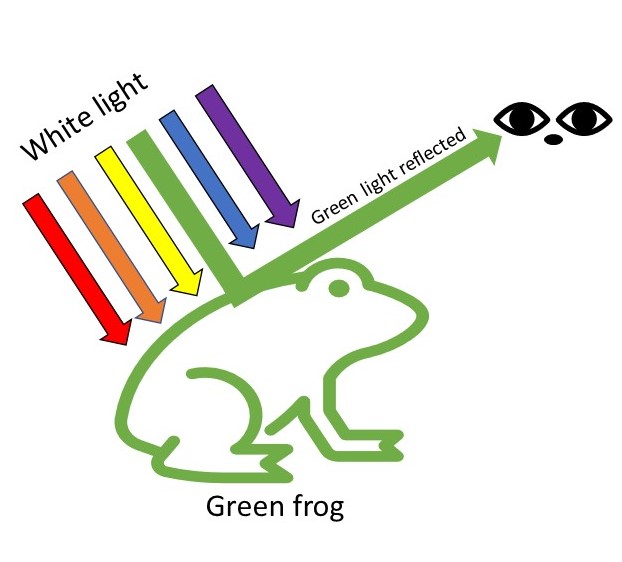 Caption: A green wavelength of light reflecting off of a giant green frog. All the other wavelengths are absorbed. Created by me, because I didn't like any of the other visuals I found online.

And so, for the August photos of the month, please join me in appreciating some ESVA photos that contain lovely arrays of color. For each image, I am adding an auto-generated color palette to display the various tones in a different way (paint-square-style), but you can click into the linked photo IDs below the captions to see them without the palettes, if that is your preference. 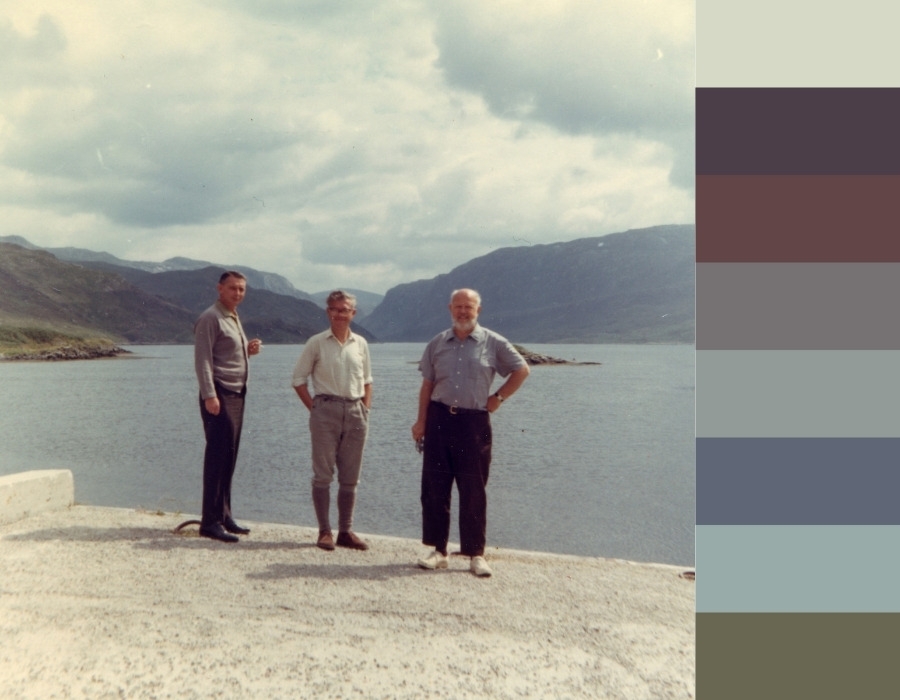 I’m starting with this photo because I just love the cool, relaxed tones. The dusty blues with touches of olive green, gray, violet, and soft eggplant are so lovely.

The photo shows John Bolton, Fred Hoyle, and William Fowler in Scotland in June 1968. They are standing on a platform waiting for a ferry to take them across a picturesque loch in Northern Sutherland, which can be seen behind them. The photograph was presumably taken by Donald Clayton, who was a part of the group outing (as evidenced by this image). I’m just guessing here, but maybe this was an impromptu loch exploration adventure for the group, because none of them are dressed for hiking. But good for them for not letting that get in their way.

While I enjoyed the last picture for its blended, relaxed tones, I like this next one for the striking, bright colors. The sharp, artificial blue of the screen behind Zewail, the vibrant green on the mic, and the deep red of his tie give one’s eyes a lot to take in here.

The image of Egyptian chemist Ahmed Zewail joined our collections after it was used in this touching Physics Today obituary, written by Majed Chergui in 2016.

I believe the photo was taken around 1999, the year Zewail was awarded the Nobel Prize in Chemistry, but if you have more information about the image, please do let me know! 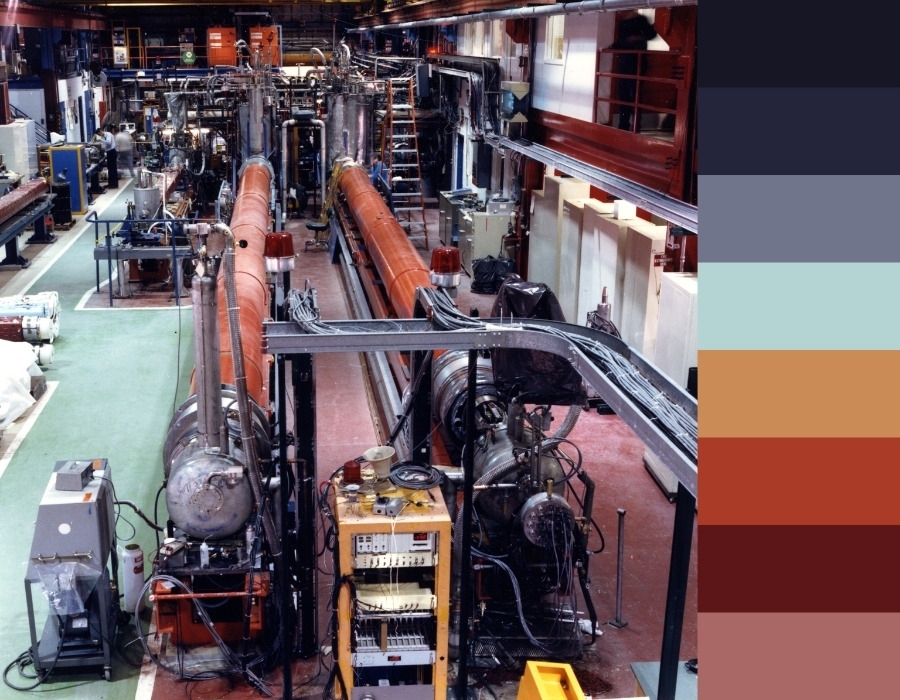 This shot of Fermilab equipment shows magnets being tested for the Superconducting Super Collider, but the many colors on display make me think of Willy Wonka and the Chocolate Factory, one of my favorite movies. I would like to believe that the magnets are also being considered for their viability to churn the chocolate river. (An aside: Grandpa Joe is one of the worst characters of all time, change my mind). At any rate, the dusty rose and seafoam green flooring, bright blue, yellow, and beet red racks and fixtures, and orange and gray lab equipment are all very visually captivating and fun. Whoever set up this lab space gets an A+ from me. 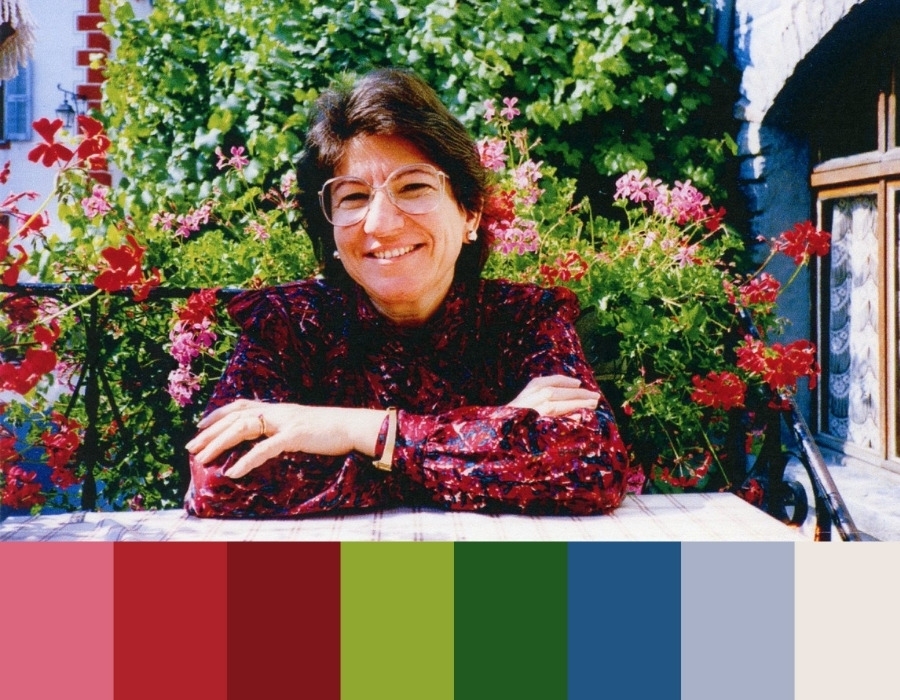 This photo makes me want to go find a flowery place to sit outside, just like Turkish-American astronomer Janet Akyüz Mattei. The vibrant greens, reds, and pinks are so lovely.

Selecting this photo for this post gave me the opportunity to learn about Janet Mattei. In addition to serving as director of the American Association of Variable Star Observers (AAVSO) for more than three decades, she was also passionate about education and mentorship, especially for young people. She also used her leadership position at AAVSO to support the interests of many amateur astronomers, which I really admire.

This 2004 Physics Today obituary for Mattei (also how this particular photo joined the ESVA collections) says that her office was decorated with “a mixture of flower photos, astronomical photos, and the many awards she accepted,” and so, as a fellow lover of all things floral, it is my hope that her surroundings in this image made her especially happy (Willson & Waagen, 2005). 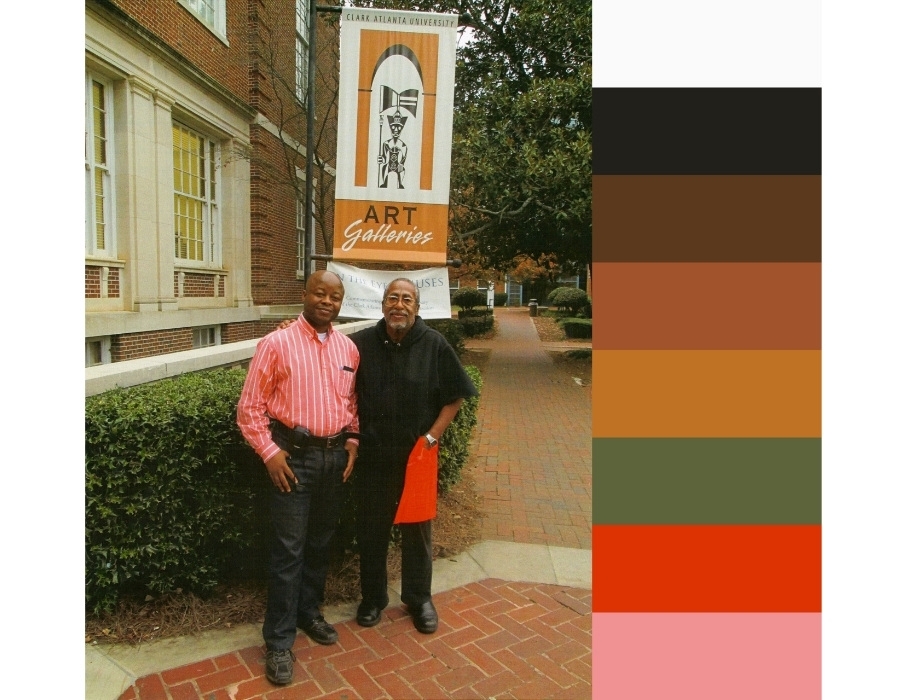 Here is another photo I really enjoy for its colors. Dr. Ron Mickens’ red bag and Dr. Justin Munyakazi’s lovely coral-pink shirt draw my eye right to the focal point of the image. They’re surrounded by deep green foliage, red and brown toned brick, and a bright orange and white sign advertising Clark Atlanta Universities’ art galleries. CAU’s art museum regularly promotes and shares the work of Black artists through its galleries! I was able to learn a little more about some of the past galleries and exhibits here. One day, I would love to visit the art museum.

This photo was taken around November 2013, but more recently, Dr. Mickens found himself as a guest on AIP’s new podcast, Initial Conditions! An episode about a collection of Mickens’ biographical research on African American physicists which lives in the archives will air tomorrow, September 1st! And the following week’s episode, set to air September 8th, will feature an interview with Dr. Mickens. So stay tuned! And in the meantime, check out these fabulous episodes, which are already available! 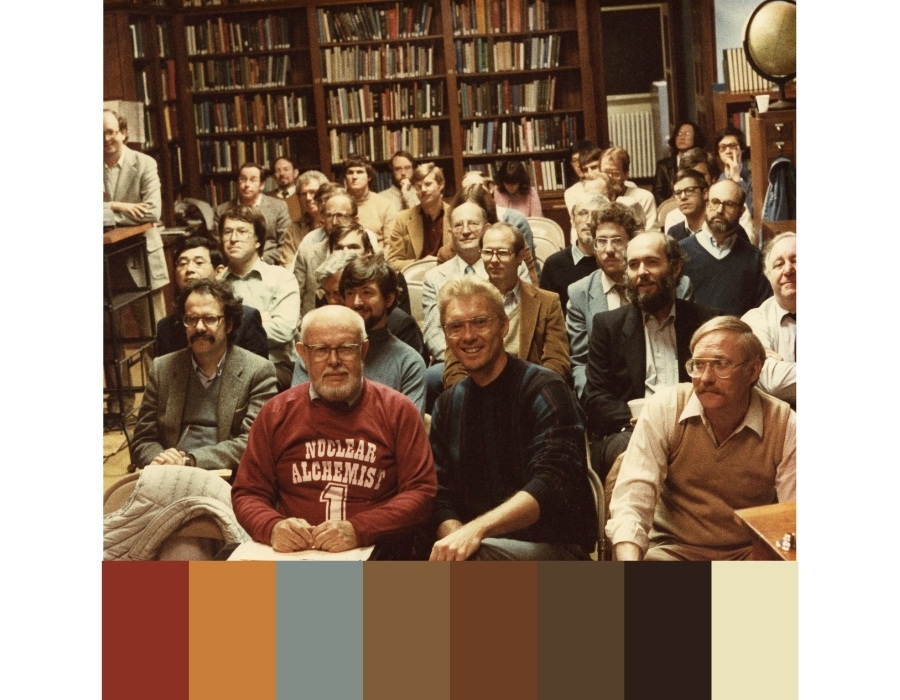 Even though this photo was actually taken in 1983, it absolutely screams 1970s to me. There are just so many brown, sepia tones happening here that allude so strongly to days gone by and I really love it. I also love the very classic looking library scene in the background of the photo, complete with a giant globe and drawers holding the card catalog. I think NBLA needs a giant globe…

In the front row of attendees sit William Fowler in a red sweatshirt and Donald Clayton in striped sweater (You might be saying to yourself, these guys again?! But hey, I like the colors). Do you recognize anyone else in the photo? If so, please let me know so I can add them to the photo description!

Before we move on to our last photo, I wanted to take a moment to acknowledge the fact that not everyone sees color the same way, or at all. Additionally, it is worth mentioning that sometimes the colors seen in historical photographs fail to depict things as they were. Early film developed for color photography reflected racial biases of the time. The film was chemically formulated to enhance the appearance of white skin and as a result did not depict Black people with clarity or accuracy, according to this Time article, which is an excerpt from Ainissa Ramirez’s book The Alchemy of Us (available at NBLA and many other libraries). Kodak was made aware of this problem, and had the ability to fix it, but did nothing until it began to impact business. And so, as enjoyable as it is to look at these colorful historical photographs, the history of color photography itself is not always so pleasant.

Check out these oral history interviews with Phillips:

Thanks for joining me in this brief exploration of some of the wonderful colors ESVA has to offer!

Physics in Motion (2019). What Is Color? https://www.youtube.com/watch?v=x7tpOkfNIHE

All color palettes generated with https://coolors.co/.