Photos of the Month: The Yoichiro Nambu (南部 陽一郎) Edition

Photos of the Month: The Yoichiro Nambu (南部 陽一郎) Edition

This year, the 18th of January marked what would have been Japanese-American theoretical physicist Yoichiro Nambu’s 100th birthday!

According to his faculty profile at the University of Chicago (courtsey of the Internet Archive's Wayback Machine) “his theories form an essential cornerstone of what physicists call the Standard Model, which explains in a unified way three of the four fundamental forces of nature: strong, weak and electromagnetic. He also has significantly influenced the development of quantum chromodynamics, a theory that describes certain interactions between quarks and between protons and neutrons.” And if you are interested, this article from the CERN Courier, goes into further detail about his work.

For these contributions, he received a great many awards and prizes. These include the 2008 Nobel Prize in Physics, as well as the 2005 Benjamin Franklin Medal in Physics, the 1994/5 Wolf Prize in Physics, the 1976 J. Robert Oppenheimer Memorial Prize, the 1982 National Medal of Science, the 1970 Dannie Heineman Prize for Mathematical Physics, the 2007 Pomeranchuk Prize, and the 1985 Max Planck Medal, to name a few. He also furthered the field as a mentor to many physics students.

Sadly, Nambu passed away in Osaka, Japan on July 5, 2015, just a few years short of his 100th birthday. But what he achieved in his 94 years is worthy of recognition. For the January Photos of the Month, join me in exploring some images from Yoichiro Nambu’s life and career. 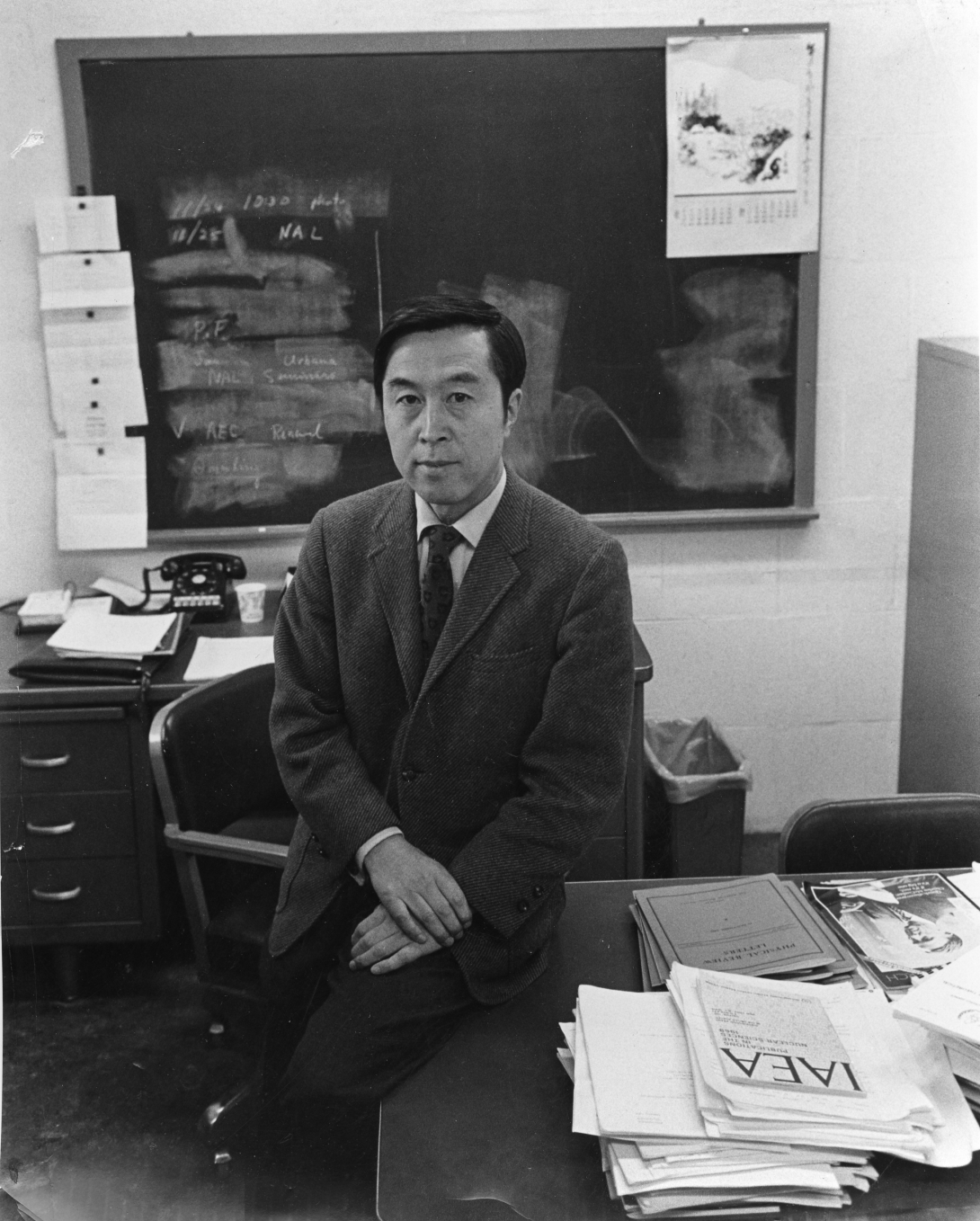 Portrait of Yoichiro Nambu in his office at the University of Chicago. 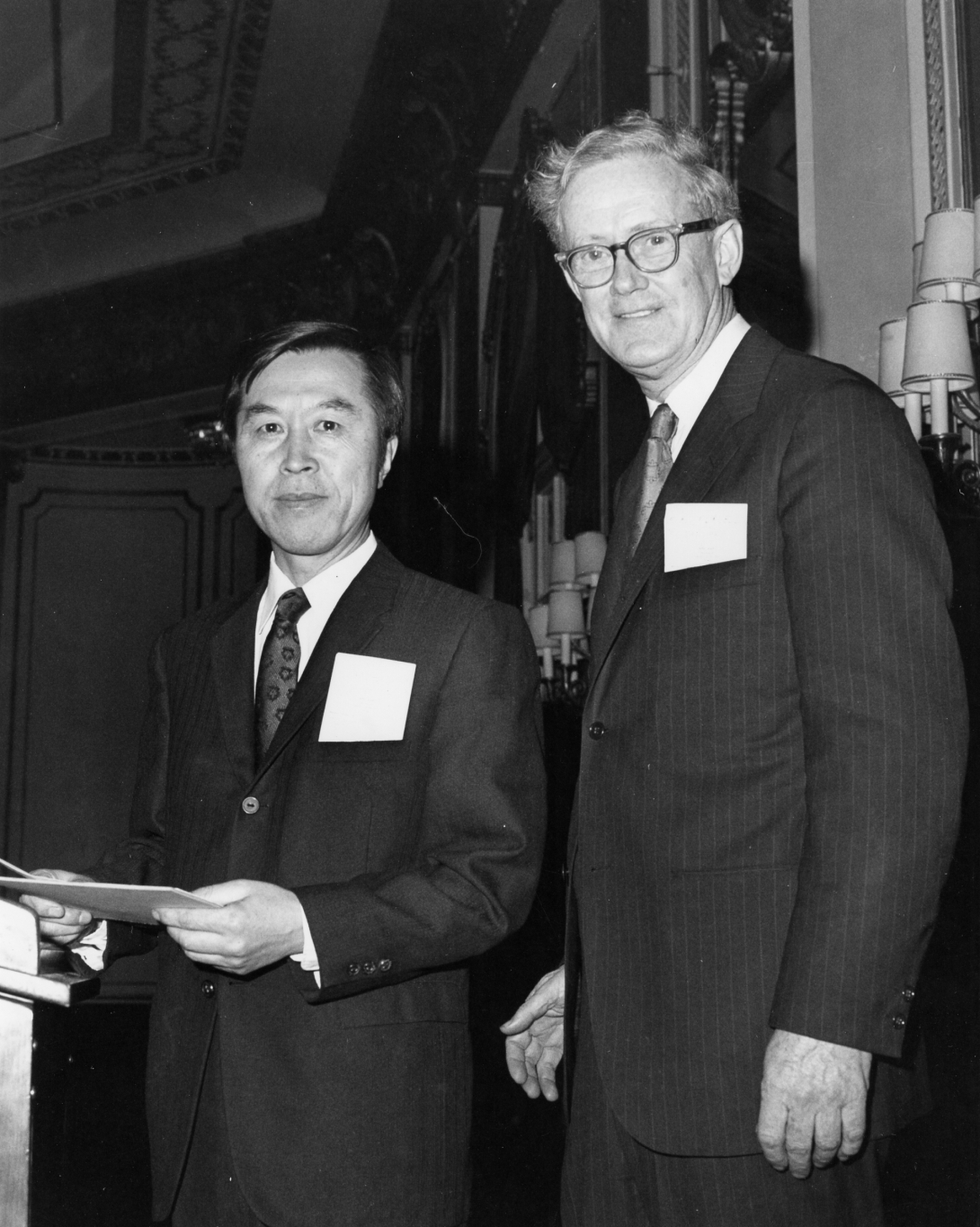 Yoichiro Nambu after receiving the AIP/APS Dannie Heineman Prize in 1970. He was awarded "for his diverse and profound contributions to theory, specifically for analysis of symmetry breaking into particle physics and of gauge invariance in the BCS theory of superconductivity, as examples of mathematical physics." To his right, stands the then-President of the American Physical Society, Edward Purcell. 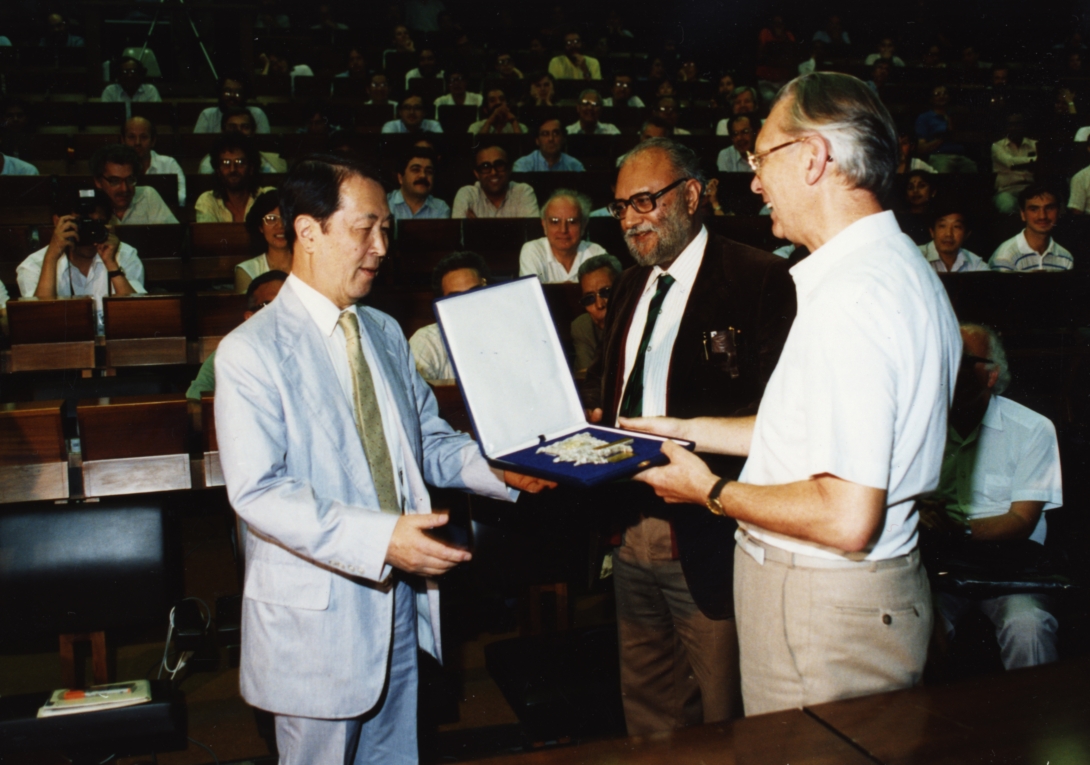 In this photo, Herwig Schopper and Abdus Salam present Yoichiro Nambu with the 1986 Dirac Prize of the Abdus Salam International Centre for Theoretical Physics. 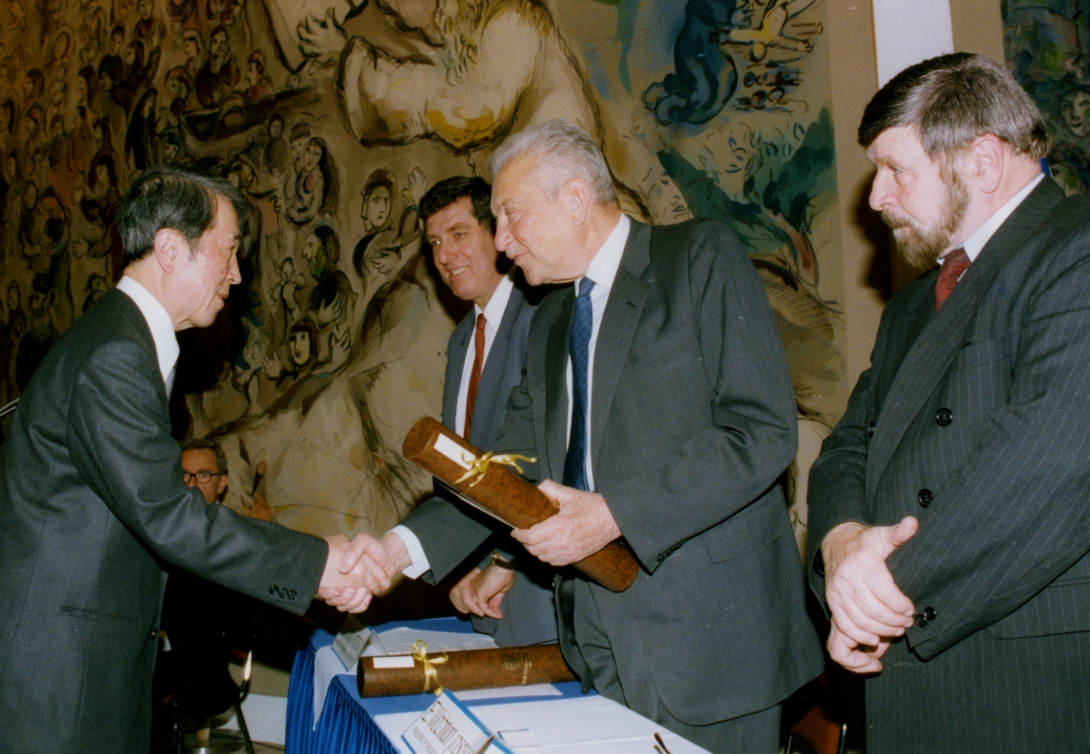 Yoichiro Nambu receiving the Wolf Prize in Physics. Nambu was awarded “for his contribution to elementary particle theory, including recognition of the role played by spontaneous symmetry breaking in analogy with superconductivity theory, and the discovery of the color symmetry of the strong interactions.” 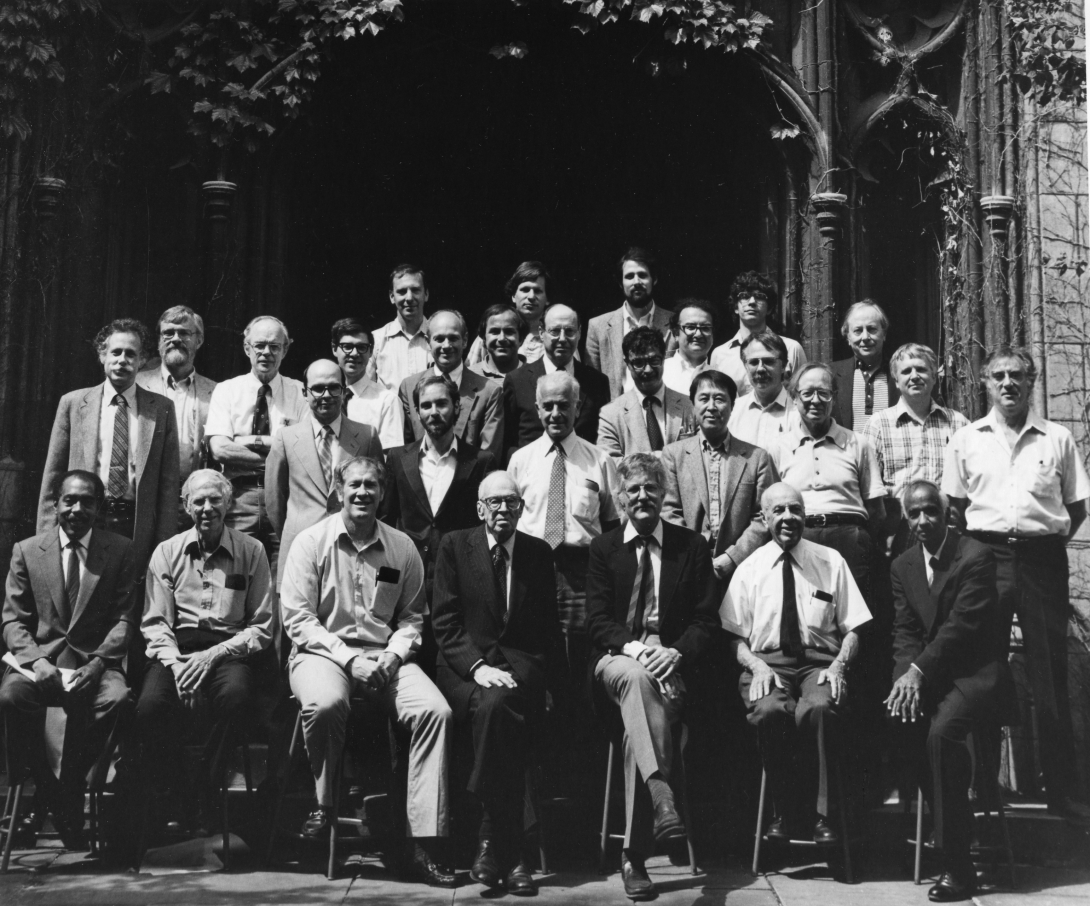 Some of the faculty of The University of Chicago Physics Department, taken on the steps of the Ryerson Physical Laboratories. Nambu can be seen among his colleagues in the second row from the front, fifth from the left. 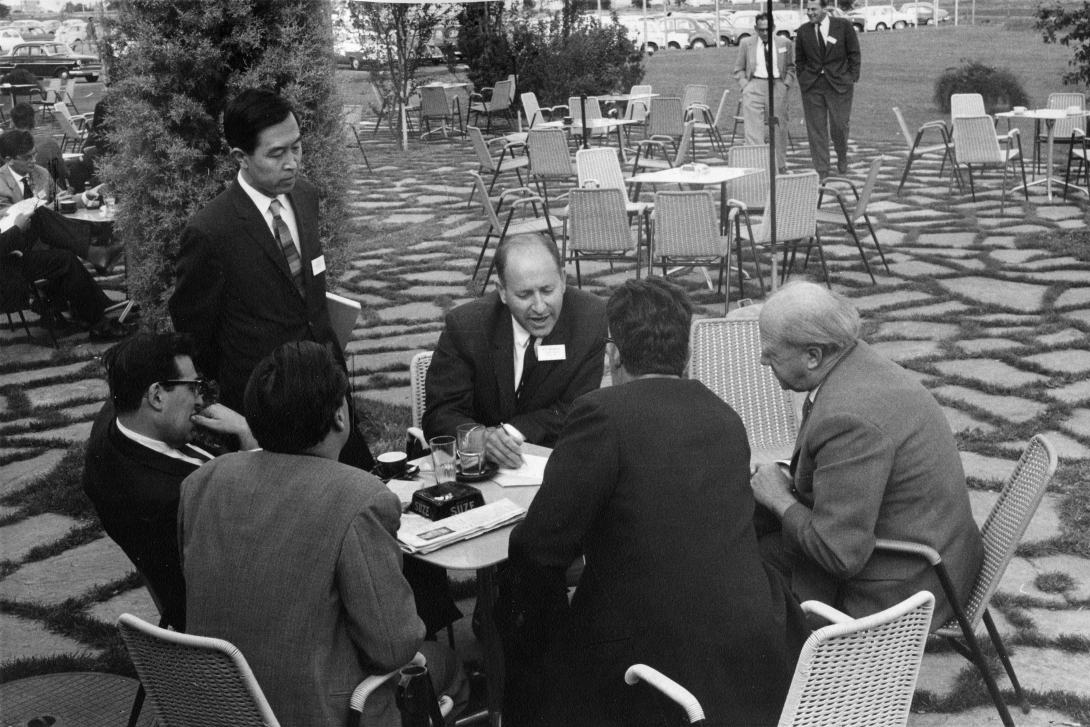 This photo of Nambu was taken at the International Conference in Geneva, Switzerland in July of 1962. He is shown standing beside a table where Julian Schwinger, Robert Marshak, Werner Heisenberg and others sit conversing. 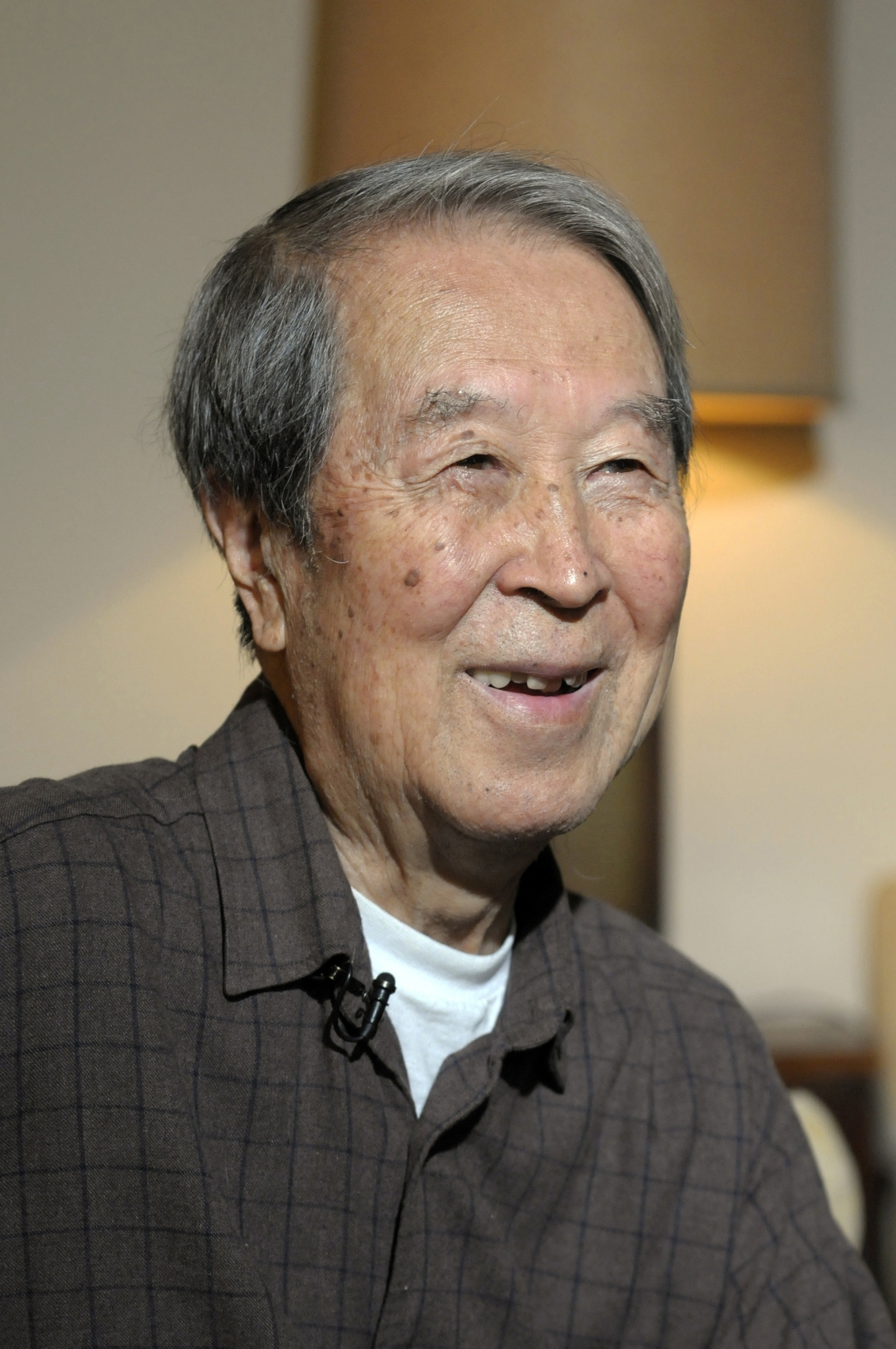 Portrait of Yoichiro Nambu in 2008, after being awarded the Nobel Prize in Physics "for the discovery of the mechanism of spontaneous broken symmetry in subatomic physics."

Nambu did not deliver a Nobel Lecture, due to health concerns for himself and his wife. Instead, he asked his long-time friend and collaborator, Giovanni Jona-Lasinio, to give the lecture in his place. I really enjoyed this article by Jona-Lasinio, in which he remembers his friend. I hoped to find a photo of the two of them for our photo-of-the-month viewing pleasure, but I could not. Still, my afternoon was brightened a bit by reading the kind things Jona-Lasinio had to say in honor of his companion.

These are just a few photos from Nambu’s career, but I hope they have left you feeling better acquainted with his accomplishments.

Part of what I love about my job is the ability to become familiar with the lives of scientific figures. Not just their work and areas of study (which often go over my head anyway, if I’m being honest), but their lives. I feel privileged to see glimpses of the experiences, thoughts, and personalities of others through their photographs and oral histories. In addition to these photos, NBLA also holds an oral history interview of Nambu from 2004, which is available here. In the interview, he discusses his education, his time in the Japanese Army during WWII, his role in the development of the physics department at Osaka City University, his immigration to the United States to work at Princeton University and the University of Chicago, and his eventual retirement. Check it out!

That’s all for the January Photos of the Month! If you’d like to subscribe to monthly email updates about POTM and the rest of the Ex Libris blog, you can do so here.