The S’s of Ex Libris Universum

The S’s of Ex Libris Universum

Or how to sound like a rare book expert, part 7

For the next installment of the ABC blog series, we continue to explore the Wenner Collection using vocabulary defined in John Carter and Nicholas Barker’s classic book, ABC for Book Collectors. Today we are highlighting the letter S. You can read the entirety of our ABC series here.

SAMMELBAND “A German word for books in which two or more bibliographically distinct works are bound together within the same covers. The practice itself, common in the Middle Ages, was carried over into the incunabular period*, and books still exist in which manuscript and printed works coexist thus – still, because the prejudice of libraries, not to mention collectors, for separating manuscripts and printed books has led to the breaking-up of even more of such books than others. The term is regularly applied to post-incunabula, but is uncomfortable if applied to later confections of the same sort: tract volume is not quite the same thing.”

Astrophysicist Subrahmanyan Chandrasekhar authored all thirty offprints bound together in this Wenner Collection sammelband. The collected works, published between the years 1931 and 1935, focus on the structure of white dwarfs. Six of the papers specifically discuss the Chandrasekhar Limit or, the maximum mass of a stable white dwarf star, work that led to Chandrasekhar’s Nobel Prize in Physics in 1983. One notable paper in this sammelband titled, “Stellar Configurations with Degenerate Cores” originally appeared in a 1934 issue of The Observatory, a journal that publishes the proceedings of the Royal Astronomical Society’s (RAS) meetings. A twenty-four-year-old Chandrasekhar read this paper at an infamous January 1935 RAS meeting. Directly after Chandrasekhar’s reading, prominent astrophysicist Arthur Eddington was invited to speak. Eddington proceeded to blindside Chandrasekhar and (incorrectly) denounce the younger physicist’s research. It took decades for Chandrasekhar’s work in this field to become completely accepted. While Chandrasekhar’s theory was accepted in the end, this event made for a turbulent beginning to the astrophysicist’s career. 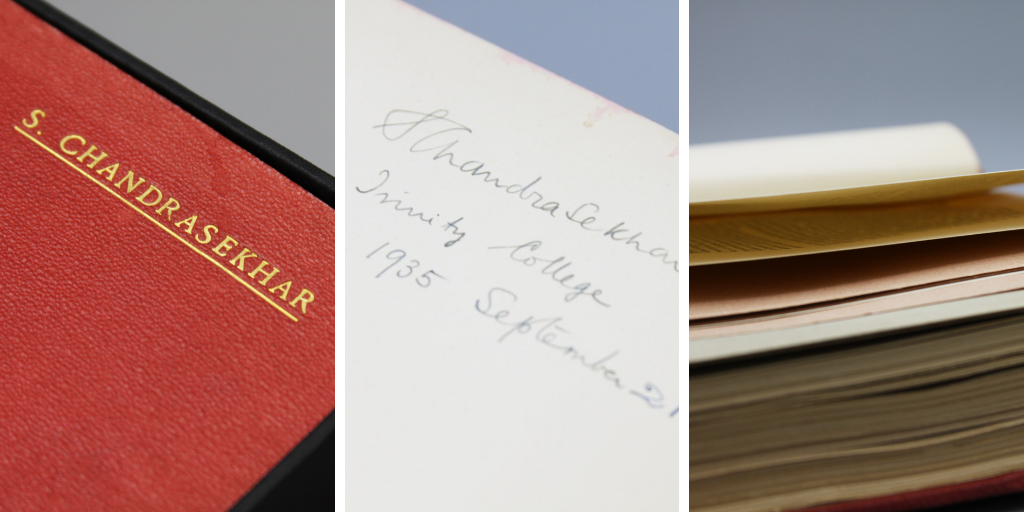 SHAVED “When the binder has trimmed off the whole margin of a leaf and touched ink, but has not actually cut off more than the outer edge of any printed letters, the result is indicated by such terms as ‘headlines slightly shaved’, ‘some side-notes shaved’, or ‘catchwords shaved on pages 16–20’. He has grazed the text and drawn blood; and it is proper that the synonym for shaved, in this context, should be touched; but it is hardly a wound, which would justify text cut into, or cropped.”

Books can have their edges trimmed for many reasons. Trimmed edges of course allow for functional leaf turning, but also have the added benefit of creating a smooth surface to accommodate decoration (e.g.: gilt edges, and fore-edge painting). And, as noted above, book edges can also be trimmed in the process of binding and rebinding. Many of the Wenner Collection titles have been rebound and subsequently have had their edges trimmed. This 1785 volume of the Philosophical Transactions of the Royal Society of London is an example of a volume with edges trimmed to the extent that some leaves qualify as shaved. 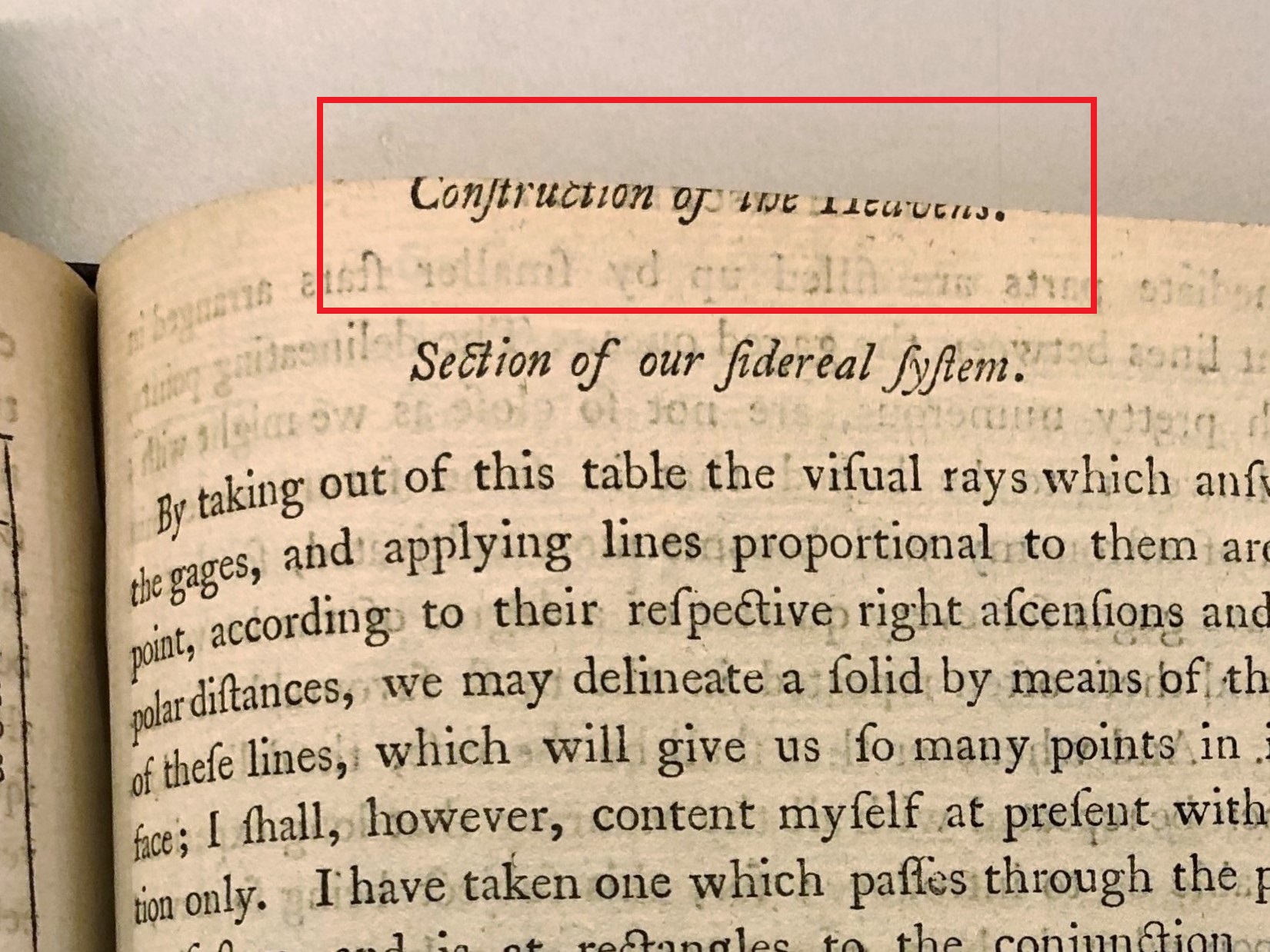 SIGNATURES “The letters (or, in some modern books, numerals) printed in the tail margin of the first leaf (at least) of each gathering or section of a book, as a guide to the binder in assembling them correctly. Signatures normally run from A to Z… If the whole alphabet has been run through, they usually proceed to AA, BB, or Aa, Bb, etc. These are commonly indicated in bibliographical descriptions as 2A, 2B, 3A, 3B, etc…”

In addition to aiding bookbinders, rare book catalogers and descriptive bibliographers utilize signatures to help identify the completeness of a book in hand and to formulate a collation: a description of the physical makeup of a book. For a thorough explanation of signatures in a hand-press period book, I recommend this Rare Book School video presented by Terry Belanger. 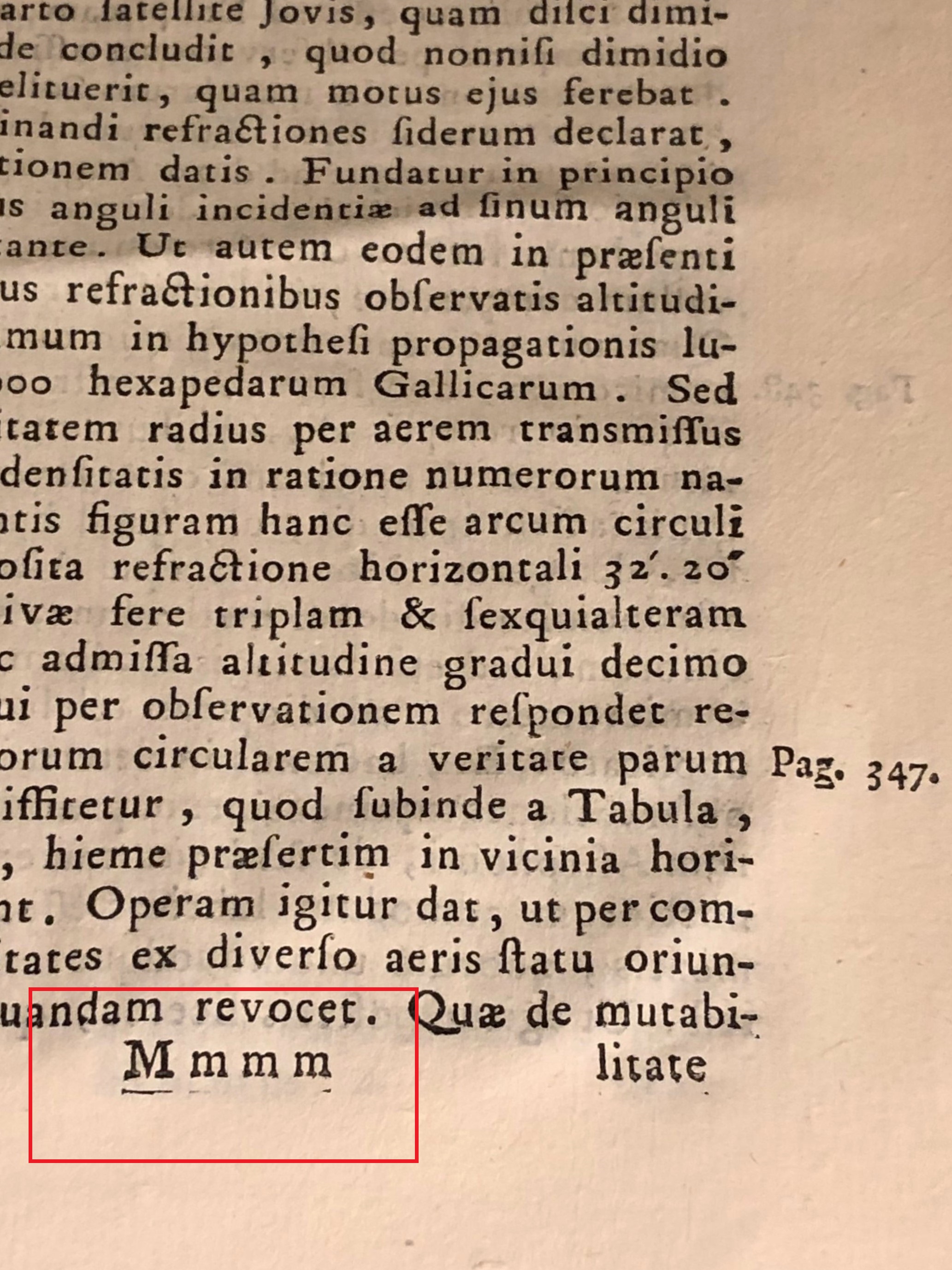 Sarah Weirich is the library's Metadata Specialist. She earned a B.A. in Art History from St. Mary's College of Maryland and an MLIS from the University of Southern Mississippi. She processes new acquisitions and works to increase the accuracy and accessibility of the library's existing catalog records. One of Sarah's favorite books in the library is The Graphic Work of M.C. Escher. In her spare time, Sarah can be found watering the disturbing number of plants in her apartment.

More by this author:
END_OF_DOCUMENT_TOKEN_TO_BE_REPLACED