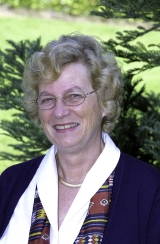 In this interview, David Zierler, Oral Historian for AIP, interviews Vera Lüth, Professor Emerita at SLAC. Lüth recounts her childhood in Lithuania and her German family background, and her precarious experiences during and after World War II. She describes her undergraduate studies at Mainz University in the Federal Republic of Germany, and what it was like as one of the few women enrolled in science classes. Lüth explains her decision to transfer to the University of Heidelberg and her formal introduction to experimental particle physics at the Institute for High Energy Physics and then at CERN. She describes her research using bubble chambers to analyze pion-proton interactions, and the formative influence of Jack Steinberger during her time at CERN, and she offers a precis on his accomplishments up to the time of their collaboration. Lüth describes her research on signal decays involving charged particles which was located at CERN while she was a graduate student from Heidelberg, and she situates her research within the broader advances occurring in experimental particle physics at the time. She explains the opportunities leading to her postgraduate research at SLAC, she conveys the excitement of joining the Lab right at the time of the “November Revolution” of 1974, and she describes watching Panofsky walking around saying “Oh my God, Oh my God...” Lüth describes the independent and concurrent discovery made by Sam Ting at Brookhaven, and she explains the importance of theorists’ calculations, including those by Dave Jackson in understanding the resonances. She explains the process leading to the formal observation of “open charm” mesons, her early collaborations with Martin Perl, and the significance of the Mark II data derived at SPEAR. Lüth explains her decision to join the California Seismic Safety Commission project and some of the disconnects with the Department of Energy that were suggestive of the eventual fact that the endeavor was not viable. She discusses the origins of the BaBar project and its search for CP violation in B meson decays and she explains why laws of conservation have long fascinated her. Lüth explains her decision to retire at a relatively young age, and she reviews her numerous contributions in an advisory capacity over the past decade. At the end of the interview, Lüth reflects on her major contributions to the field, the larger-than-life stature of Panofsky, the foundational research of particle physics as an entrée to cosmology, and she describes some of the major and exciting future endeavors at SLAC.