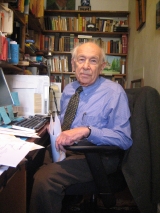 In this interview, David Zierler, Oral Historian for AIP, interviews Josef Eisinger, professor emeritus at the Mount Sinai School of Medicine. Eisinger recounts his childhood in Vienna and his experiences in England as a refugee from the Nazis during World War II. He talks about his transfer to Canada as an “enemy alien,” his experience transitioning to civilian life, and his matriculation at the University of Toronto, where he completed his undergraduate and Masters work in physics before transferring to MIT for his Ph.D. Eisinger discusses his work with Jerrold Zacharias and Viki Weisskopf. Eisinger discusses his tenure at Bell Labs, where he pursued a variety of interests in spectroscopy and electron-nuclear double resonance. He explains his developing interest in molecular biology and the Guggenheim Fellowships that allowed him to advance in this new field. He discusses his work on lead poisoning and his transition to Mount Sinai. Toward the end of the interview, Eisinger discusses his involvement with translating the letters of Brahms.