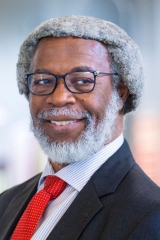 Interview with Raman Sundrum, distinguished university professor of physics at the University of Maryland. Sundrum recounts his childhood in India, Maryland, and Australia and he describes his life as the child of an international economist with the UN and the World Bank, and a pediatrician. He describes his undergraduate experience at Sydney University where he majored in physics and where he learned that his abilities were in theory. Sundrum discusses his time as a graduate student at Yale, where he was accepted to the math department, and he explains how he immediately shifted over to physics. He explains his initial difficulty settling on a research focus under the direction of Laurence Krauss before he developed a relationship with Mark Soldate and settled on thesis research on particle theory beyond the Standard Model. Sundrum discusses his postdoctoral work at Berkeley, where he spent time at the Lawrence Berkeley Laboratory. He describes being recruited by Howard Georgi to do postdoctoral work at Harvard, and he explains how he collaborated with Lisa Randall and how the Randall-Sundrum papers originated. Sundrum describes the impact of this collaboration on research in supersymmetry, and he explains the events leading to his tenure at Johns Hopkins. He explains how his research focus shifted to cosmology and he discusses his decision to switch to a faculty position at Maryland, where he became director of the Center for Fundamental Physics. At the end of the interview Sundrum explains his longstanding fascination with metaphysical ideas, and he reflects on the importance of developing intellectual maturity over the course of one’s career.