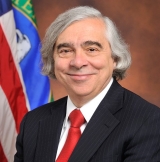 In this interview, Ernest Moniz, Emeritus Professor and Special Adviser to the President of MIT, discusses his time as U.S. Secretary of Energy under Barack Obama. Moniz discusses his time as an undergraduate at Boston College working under Joe Chen and their efforts building a resonant cavity. He speaks about his experience as a graduate student at Stanford University working Dirk Walecka on the study of theoretical condensed matter physics and how it led to his eventual publishing of a paper about using a modified fermi gas to understand deep inelastic scattering. Moniz describes his time working in Washington with the Office of Science and Technology Policy and how the OSTP became marginalized under the George W. Bush and Trump Administrations. He discusses the Wen Ho Lee scandal and subsequent development of the National Nuclear Security Administration and how it has evolved throughout the years. Moniz talks about his partnership with John Deutch at MIT on a policy-oriented study of the future of nuclear power which eventually became known as the series, The Future of... He details his time working in the President’s Council of Advisors on Science and Technology during the Obama Administration and his eventual role as the Secretary of Energy. Moniz Discusses the development of the Iran Nuclear Deal and the cooperation of the countries involved, as well as how the U. S’s relationship with Iran has changed over the years. He reflects on how the Trump Administration undid several Obama era initiatives pertaining to energy and climate and the lasting impacts of those actions. He also discusses becoming an advisor to Saudi Arabia and the planned mega-city of the Tabuk region. Lastly, Moniz reflects upon the challenges the Biden Administration may face moving towards a more decarbonized energy future.