Edward “Rocky” Kolb is the Director of the Kavli Institute for Cosmological Physics at the University of Chicago and the Arthur Holly Compton Distinguished Service Professor of Astronomy at the University of Chicago. In this interview, Kolb explains how he acquired his nickname and he recounts his upbringing in New Orleans and his habit of spending time in the local library, where he developed his interest in science. He describes the financial constraints that compelled him to attend the University of New Orleans for college, and he characterizes his education there as broad but not deep, which caused him to consider a wide range of specialties for his graduate research at the University of Texas. Kolb describes working with his graduate advisor Duane Dicus in applying particle physics to cosmological questions, and he summarizes his dissertation research on the effects of axions in stars. He discusses his postdoctoral research with Willy Fowler at Caltech, and he emphasizes the influence of Allan Sandage on his decision to focus on cosmology.  Kolb describes his second postdoctoral fellowship at Los Alamos where he joined the burgeoning astrophysics group in the Theoretical Division to work on Big Bang nucleosynthesis.  He explains his decision to join the astrophysics group at Fermilab, where he collaborated closely with Michael Turner and benefited from the support of Leon Lederman. He describes his developing interest in supersymmetry and neutrino oscillations, he describes the impact of Alan Guth’s lectures on inflation, and he explains his increasing involvement with the astronomy and astrophysics department at the University of Chicago culminating with an offer for him to become chair of the department.  He describes his objectives and achievements in that position, he explains how he maintained research interest in creating particles from the vacuum, and he describes how this research could be of value in the ongoing quest to understand dark matter. At the end of the interview, Kolb reflects on the different approaches that religion and science take to understanding reality, and he explains why he is most optimistic that understanding dark matter is the most likely major future breakthrough in his field. 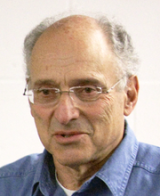 In this interview, Gary Feldman, the Frank B. Baird, Jr. Research Professor of Science at Harvard University, recounts his childhood in South Bend and his undergraduate experience at the University of Chicago. Feldman describes the opportunities that led to his graduate work at Harvard to work with Frank Pipkin on electro production pion experiments. Feldman discusses his postgraduate research at SLAC where he worked closely with Roy Schwitters in Burt Richter’s group measuring the form factors of baryons and pions. He describes the similarity of experiments connection Richter’s discovery of the Psi and Martin Perl’s discovery of the Tau twenty years later, and he describes the SLAC LDL detector project and the impact of LEP collaboration on SLAC. Feldman explains his decision to join the faculty at Harvard and the status of the CDF experiment at Fermilab at that point. He discusses his contributions to the NOMAD research at CERN looking for the tau neutrino in an electronic bubble chamber, his work on the MINOS experiment at the Soudan mine, and he explains the problem of CP violation in terms of what one can see with neutrinos and anti-neutrinos. Feldman prognosticates on future work to determine evidence for a sterile neutrino, and he offers his perspective on the downfall of the SSC and why Burt Richter’s directorship may have made the difference. At the end of the interview, Feldman points to Japan and China where some of the most interesting high energy physics is happening, and he notes the value that particle physics is contributing to deep learning and artificial neural nets.

Awareness in high school of the Sandage Program to observe the rate of expansion of the universe and awareness of the impending operation of the Mt. Palomar telescope; early reading in cosmology; prejudice toward the steady state model in graduate school because of its definite predictions; the reality of cosmology as a legitimate science; Weinberg's early interest in cosmology: influence of Herman Bondi's book; concern in the early 1960s over limited contact between theory and observations; early work in the 1960s on the neutrino version of Olber's Paradox and the possibility of a degenerate sea of neutrinos; preference for an oscillating universe as the next best thing after a steady state universe because you don't have to specify initial conditions; design of an experiment to search for degenerate neutrinos; Weinberg didn't take seriously his own work in cosmology in the 1960s; the importance of the discovery of the cosmic background radiation for making cosmology a legitimate science; the origin of Weinberg's book Gravitation and Cosmology; Weinberg's regret that he spent 1969-1971 working on a textbook when he should have been working on gauge theories in particle physics; history of the application of particle physics to cosmology.