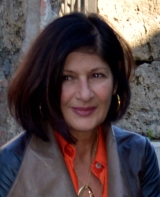 Interview with Elena Aprile, Centennial Professor of Physics at Columbia University. Aprile describes the feeling of just having been elected to the National Academy of Science and she describes how the XENON Dark Matter search has continued despite the pandemic. She explains why so much of physics is devoted to try to understand dark matter and where she sees the interplay of theory and experiment toward that end. Aprile describes why finding dark matter will mean finding new physics beyond the Standard Model, and she recounts her upbringing in Milan and her developing interests in physics during high school. She describes her first visit to CERN when she was a student at the University of Naples and what it was like to meet Carlo Rubbia. Aprile discusses her graduate work at the University of Geneva where she worked on scattering protons to study time violation effects. She explains her interest in the UA1 and UA2 experiments at CERN and her work on noble liquid detectors, her appointment at Harvard, and her first involvement with radiation spectroscopy. Aprile narrates her realization that xenon would be valuable for astrophysics and dark matter specifically, and she describes the origins of the LXeGRIT telescope project. She explains why Gran Sasso was chosen on the site of the XENON experiment and some of the technical and economic challenges in dealing with xenon on the scale required to search for dark matter. Aprile reflects on the difficulties she has faced as a woman in her field, and she describes the competitive value in having the LZ experiment and its search for dark matter. She explains how one goes about searching for dark matter without knowing what dark matter is. At the end of the interview, Aprile imagines what it will mean to find dark matter, what mysteries it will solve, and why she will remain steadfastly cautious before confirming the discovery.