In this interview Pierre Demarque discusses topics such as: his early interest in astronomy; listening to radio lectures by Fred Hoyle; study at the University of Toronto; interest in cosmology; work with Leonard Searle; master's thesis on stellar structure; influence of Searle and J. Beverly Oke; move to the United States and Louisiana State University; University of Illinois and the influence of Ivan King; Ludwig Biermann; George McVittie; going to the University of Chicago and contact with Chandrasekhar; stellar evolution; Yerkes Observatory; leaving Chicago for Yale University; Walter Baade philosophy of studying cosmology; globular clusters; John Eddy's work on solar variability; stellar populations and galaxy evolution. 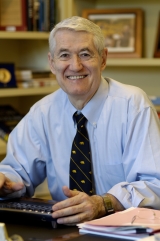 In this interview, David Zierler interviews Robert Birgeneau, Silverman Professor of Physics, Materials Science and Engineering, and Public Policy at the University of California, Berkeley. Birgeneau recounts his working class childhood in Toronto and the unlikely circumstances leading to his enrollment at the University of Toronto. He explains his interest in physics from a mathematical perspective as an undergraduate, and he describes his graduate work at Yale, where he studied electron spin resonance spectroscopy. Birgeneau describes his involvement in the civil rights movement, and his postdoctoral work at Oxford and at Bell Labs, which sent him to conduct research at Brookhaven. He explains his move to MIT, and his work as both department chair and Dean of Science. Birgeneau describes his tenure as president of the University of Toronto, and the recruitment process leading to his tenure as chancellor at Berkeley. At the end of the interview, Birgeneau explains how important it was to retain a physics research agenda even while running major universities, and he describes the pleasures of returning to teaching physics after spending much of his career in academic administration.