This interview covers the education and professional career of physicist Joseph Giordmaine, who spent his professional career at Bell Laboratories, Murray Hill, New Jersey (1961-1988), NEC laboratories, Princeton, New Jersey (1988-1998) and Princeton University (1998-2005). Giordmaine earned his undergraduate degree in physics from the University of Toronto, and his Ph.D. in physics at Columbia, studying masers under Charles Townes. Most of his research was related to lasers and non-linear optics, with particular focus on phase matching, optical parametric generation, picosecond correlation light duration measurements, and non-linear properties of liquids. Recollections of people include Charles Townes, Ali Javan, Willard "Bill" Boyle, Arno Penzias, and Kumar Patel. For detail on Giordmaine's early laser work, this oral history can be read in conjunction with an oral history Giordmaine did for the Center for the History of Physics in 1985 as part of the laser history project. 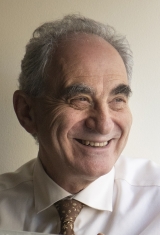