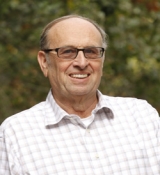 In this interview, David Zierler, Oral Historian for AIP, interviews Abraham Seiden, Distinguished Professor Physics Emeritus at UC Santa Cruz. Seiden discusses his current interests in developing silicon detectors for the high luminosity LHC and sensors for the TRIUMF accelerator, and he surveys the current interplay between theory and experiment in particle physics more broadly. He recounts his birth in a displaced persons camp after World War II and his childhood in Brooklyn and then in California, and he explains his decision to go to Columbia for his undergraduate studies. Seiden describes his graduate research at Caltech and then UC Santa Cruz under the direction of Clemens Heusch to conduct research on deep inelastic muon scattering at SLAC. He discusses his subsequent research on the intersecting storage ring at CERN and he describes how the “November Revolution” at SLAC resonated at CERN. Seiden describes the opportunities that led to him joining the faculty at Santa Cruz and his involvement on the high PT photon experiment at Fermilab. He recounts his interest in Higgs research and the leadership of George Trilling and he explains the origins of the Santa Cruz Institute for Particle Physics. Seiden discusses his advisory work for P5 and the broader state of play of particle physics in the United States and he describes the impact on CERN following the cancellation of the SSC. He discusses the import of the ATLAS upgrade, his involvement with LIGO, and his contributions to BaBar at SLAC. Seiden narrates the run-up and the impact of the Higgs discovery at CERN, and its impact on searching for physics beyond the Standard Model. He surmises how a particle physics approach will help to unlock the mystery of dark matter, and he explains his motivations to write an introductory textbook on particle physics. At the end of the interview, Seiden compares the opportunities in the field that were available to him as a graduate student as opposed to his own students, and he explains why working on the SSC was the most fun he’s had in the field, despite its ultimate fate.