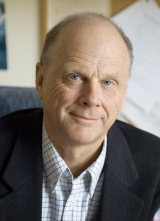 Interview with Lars Brink, Professor Emeritus in theoretical physics at Chalmers University of Technology in Sweden, with affiliations at CERN and the Max Planck Institute as well. Brink provides a broad historical perspective on the current state of play in string theory, and he conveys optimism that string theory remains the best path to developing a theory of quantum gravity. He recounts his childhood in Sweden and the interests that led to his undergraduate education in engineering physics at Chalmers. Brink explains his decision to remain at Chalmers for graduate work to study theoretical particle physics under the direction of Jan Nilsson, and he describes his interactions with Veneziano, Nambu, and Holger Bech Nielsen in Erice. He discusses the work of David Olive and John Schwarz during his time at CERN and his own focus on scattering amplitudes. Brink recounts the opportunities that led to his professorship at Chalmers, and he discusses the early days of supersymmetry at Nordita in Copenhagen. He describes his work on super conformal algebras, and his visiting professorship at Caltech where he worked with John Schwarz and Joël Scherk. Brink discusses the superstring revolution of 1984 and the optimism in finding a breakthrough to understanding gravity. He conveys his longtime interest in N=4 Yang-Mills theory, and he ponders whether supersymmetry would have been detected at the SSC. Brink discusses his work on the Nobel Prize committee, and he describes his feelings when the Higgs was discovered. He explains why supergravity remains a rich field and why he remains optimistic about new physics beyond the Standard Model. At the end of the interview, he predicts that one hundred years from now, fundamental physics will have advanced to a point of unifying simplicity.