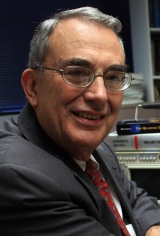 In this interview, David Zierler, Oral Historian for AIP, interviews Louis J. Lanzerotti, Distinguished Research Professor at the New Jersey Institute of Technology, Center for Solar Terrestrial Research in the Department of Physics. Lanzerotti describes the origins of the Center, and he recounts his Italian heritage and his upbringing in southern Illinois. Lanzerotti discusses his undergraduate experience at the University of Illinois and his initial interest in civil engineering. He explains why he transitioned to physics, the formative influence of Charlie Slichter and the opportunities that led to his graduate admission to Harvard, where he developed fiber optics research under the direction of Frank Pipkin. He explains his decision to accept a postdoctoral offer at Bell Labs, and he explains how Bell Labs became involved in space research. Lanzerotti discusses his initial work on the Applications Technology Satellite 1 and the earliest incarnations of space weather as a discrete field. He describes his work on communications and geophysical collaboration and his involvement it the beginning of the Voyager, Ulysses, and then the Cassini missions. Lanzerotti describes the breakup of Bell Labs and the considerations that led to him joining the faculty at NJIT. He explains his ongoing research focus analyzing data from the Ulysses mission at the Van Allen probes, and he describes his service on the National Science Board. Lanzerotti describes his long association with the AGU, and his work on Director of the Board for AIP. At the end of the interview, Lanzerotti reflects on the opportunities in his career that intersected with the zenith of American scientific power and influence, and he prognosticates on both future prospects for foundational discovery and the societal commitments required to achieve them.