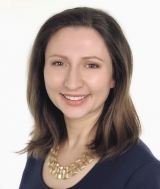 In this interview, David Zierler, Oral Historian for AIP, interviews Ksenia Blinova, acting assistant division director, Office of Science and Engineering Laboratories, Division of Biomedical Physics at the FDA. Blinova recounts her childhood in Tula, Soviet Union, and she describes the “physics” and “lyrics” educational scheme that splits school children into either a science or humanities focus. She describes her education at Moscow State University, where she became interested in physics and where Victor Yuzhakov and Svetlana Patsaeva were her graduate thesis mentors and where she developed her expertise in fluorescence intensity. Blinova discusses her postdoctoral work at the NIH where she was mentored by Robert Balaban in the Cardiac Energetics Laboratory. She describes the fellowship opportunities stemming from NIH-FDA collaborations that led to her initial work at the FDA, where she learned both biostatistics and took training in regulatory issues. Blinova discusses her subsequent work in electrophysiology and induced pluripotent stem cells, and she describes some of the challenges in ensuring that medical devices are certain to be safe and effective for patients. She describes how physics is applied in her division, particularly in computer modeling, and she describes her interest in developing human cell research as an alternative to animal testing. At the end of the interview, Blinova describes how she plans to remain close to the research as her administrative responsibilities increase, and she explains the promise of her current work on cardiac ablation for patients suffering from atrial fibrillation.