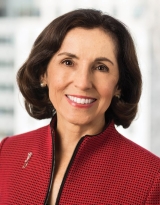 In this interview, David Zierler, Oral Historian for AIP, interviews the Honorable France Córdova, former Director of the National Science Foundation. Córdova recounts her childhood in Europe and then Southern California. She discusses her experiences in Catholic school and her decision to study at Stanford as an undergraduate, where she did not focus on science. Córdova explains her initial desire to pursue graduate work in anthropology until a series of events led to her employment at Caltech and ultimately, her dissertation work in astrophysics and data analysis. Córdova discusses her work at Los Alamos and her faculty appointment at Penn State. She describes her tenures as Chancellor at University of California Riverside, NASA administrator, and as President of Purdue, and she explains her main goals and accomplishments in each of these positions. In the latter portion of the interview, Córdova describes her work at Director of the NSF and she provides a detailed overview of science policy and funding during her years serving in the Obama administration.