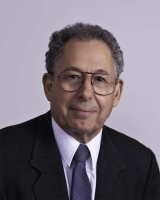 In this interview, David Zierler, Oral Historian for AIP, interviews David J. Haas, President of the Tecco Corporation. Haas discusses his work as founder of Tempbadge and he recounts his childhood in Buffalo and then Texas. He describes his undergraduate education at the University of Buffalo, where biophysics was beginning to start as a distinct discipline. Haas explains his decision to remain at Buffalo for his graduate research, working under Fred Snell, and he describes his introduction to crystallography from David Harker at the Roswell Park Memorial Institute. He emphasizes the critical support provided by the National Institutes of Health (NIH), both to him as a graduate student and to biophysics generally at the time. Haas discusses his postdoctoral research in cryo-crystallography with David Phillips at the Royal Institute in London, and his brief work beforehand at the Naval Research Lab in Washington, DC. He describes his subsequent work at the Weizmann Institute in Israel where he continued his research in cryo-crystallography, and he describes the scene there during the Six Day War. Haas discusses his work at the Philips Corporation in New York, where he became involved with the X-ray research that would go into security scanners at airports and stadium venues. He explains his decision to go into business for himself with the launch of Temtec for which he created self-expiring visitor badges. At the end of the interview, Haas provides an overview for some of the major advances in biophysics over the course of his career, and he expresses optimism regarding the viability of antiviral therapies for Covid-19 by the end of the year.

In this interview, David Zierler, Oral Historian for AIP, interviews Wayne Hendrickson, Violin Family Professor of Physiology and Cellular Biophysics at Columbia University. Hendrickson recounts his childhood on a dairy farm in Wisconsin and explains how this environment fostered his interest in the natural world. He describes his undergraduate experience at the University of Wisconsin at River Falls, and his formative work at Argonne Lab where he studied Caesium-137 levels in beagle dogs. Hendrickson describes his intent to focus on biophysics in graduate school and his decision to accept at offer at Johns Hopkins, where he became interested in protein crystallography and electron microscopy. He discusses his dissertation research under the direction of Warner Love and the importance of the research conducted at Woods Hole which influences his work on studying hemoglobin in lampreys. Hendrickson describes the importance of computational biology and the promises this offered protein crystallography, and he explains the influence of Linus Pauling in advancing the field. He explains why he stayed on at Hopkins after his defense because he felt there was more work for him to complete on the Patterson function. Hendrickson discusses his work at the Naval Research Laboratory on parvalbumin molecules and his developing interests in anomalous scattering techniques. He discusses how the field matured and had gained broader acceptance, and he surmises how these trends led to recruitment efforts that led to his tenure at Columbia in the 1980s. Hendrickson explains the labyrinthine nature of his many appointments and affiliations at Columbia, and the opportunities he has had to teach and to mentor graduate students within an environment that is primarily research-focused. He discusses the improvement of technology over the course of his time at Columbia, and he discusses his work on beamlines at Howard Hughes and Brookhaven. Hendrickson describes his work as scientific director of the New York Structural Biology Center, and he explains how his research has moved closer toward clinical motivations in recent years. At the end of the interview, Hendrickson reflects on his long career in biophysics, and he draws on the story of HIV infectivity as an example of how the field can progress from a place of really not understanding basic biological problems, to developing effective therapies.