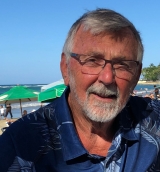 This interview with Jim Stith was conducted following his retirement as Vice President of the AIP’s Physics Resource Center. It covers his childhood in rural Virginia, and how he became interested in science, attendance at segregated schools, and at Virginia State University, where he received a BS degree in physics 1963 and an MS in physics in 1964. It discusses his work in physics under John Hunter, the third African-American to receive a PhD in the subject. The interview then covers his drafting into the Army during the Vietnam War, and his work in air defense in Korea, as well as his brief and successful career as an associate engineer at RCA under Bob Pontz. His graduate education and obtaining of a D.Ed degree in physics in 1972 at Pennsylvania State University is discussed. The interview then focuses on his lengthy career as an instructor of physics at the United States Military Academy at West Point (1972-1993), his experiences as an African-American physicist, and his work in the field of physics education. The remainder of the interview concentrates on his move to teach and research physics education at The Ohio State University, his involvement with the American Association of Physics Teachers, and his work at AIP.