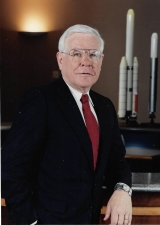 Interview with George Paulikas, retired Executive Vice President of the Aerospace Corporation. Paulikas describes his birth country of Lithuania and his family’s experiences in World War II and the convoluted path that brought his family to the United States in 1949. He recounts his teenage years in Chicago and his undergraduate education, at the University of Illinois, first at Chicago and then Champaign-Urbana where he majored in engineering physics. Paulikas discusses his graduate research at UC Berkeley where he focused on plasma physics under the direction of Ken Watson, he describes his first job at Aerospace as a member of the Space Physics Laboratory, and he explains the historical origins of the corporation, and its key mission to assist the U.S. Air Force in the planning, development, acquisition, and operations of national security space systems. Paulikas describes his ascent at Aerospace as Lab Director and the emphasis on basic research that ensured his integration with the broader space physics community. He explains the circumstances of being named Vice President of the Laboratories, then Vice President of the Development Group, where he focused on planning functions future Air Force systems. Paulikas describes Aerospace as a Federally Funded Research and Development Center and he discusses some of the major projects at the corporation, including the Manned Orbiting Laboratory, the Space Transportation System, the creation of GPS, and its involvement in Reagan’s SDI program. He discusses his subsequent role as Senior Vice President of Programs and his focus on getting space launches right before he was named Executive Vice President. At the end of the interview, Paulikas reflects on how Aerospace responded to the end of the Cold War and its increasing emphasis on space exploration, and he emphasizes his pride in his record of mentorship.