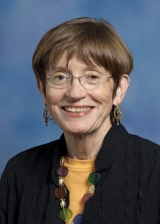 This is an interview with Martha Krebs, former director of the Consortium for Building Energy Innovation for Penn State in Philadelphia and advisor to the Defense Science Study Group at the Institute for Defense Analysis. She recounts her childhood in postwar Japan and then central Pennsylvania, and she describes her interest in science and the formative influence of Sputnik on her ambitions during her time in a Catholic high school. Krebs explains her decision to attend Catholic University where she knew she wanted to pursue a degree in physics from the beginning. She discusses the importance of securing a National Science Foundation graduate fellowship and the family considerations that influenced her decision to stay at Catholic for graduate school, where she studied under Tomoyasu Tanaka, who was working on hydrogen bonds in ferroelectrics. Krebs describes the opportunities leading to her first postgraduate job in the Science Policy Research Division of the Congressional Research Service which led to her work on the Energy Subcommittee of the Science and Technology Committee, and she provides context on the major issues relating to federal energy policy in the mid-1970s and the rebalancing of power between the White House and Congress in the post-Watergate era. She narrates the origins of the Department of Energy during the Carter administration and she describes the circumstances that led to her tenure as staff director of the Energy Subcommittee which was becoming increasingly important to national developments in renewable and efficient energy sources. Krebs describes the major partisan and industry dynamics that shaped her work on the committee, particularly with the ascendancy of the conservative movement in the 1980s. She explains her decision to move to the Lawrence Berkeley National Laboratory, which was looking to reinvent itself beyond high-energy physics with new projects in relativistic heavy ion collider projects. She describes the central influence of the Cooperative Research and Development Agreements in the relationship between the Lab and the DOE, and she describes the events leading to her work as director of the Office of Science in the DOE for the Clinton administration. Krebs discusses the collapse of the SSC project at the beginning of her tenure and her contributions to the Office of Energy Research and the applied R & D programs and how she understood the relationship between DOE and OMB on science policy generally during the Clinton years. She describes the state of high energy physics during this time and the DOE’s involvement in nanotechnology research, her decision to join the California NanoSystems Institute, and then her decision to become director of energy efficiency at the Philadelphia Naval Shipyard. At the end of the interview, Krebs reflects on her career and offers insight into how U.S. national policy can be best directed toward further gains in energy efficiency into the future.