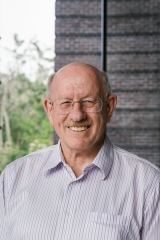 Interview with Jonathan Dorfan, emeritus director of SLAC, and emeritus president of the Okinawa Institute of Science and Technology, Graduate University. Dorfan recounts his childhood in South Africa and his experiences with apartheid, and he explains how he developed his early interests in science. He discusses his time at the University of Cape Town and a formative visit he made to SLAC where his older brother was working. Dorfan describes his subsequent studies at UC-Irvine and he explains his interest in pursuing a graduate degree in particle physics and high-energy physics during the excitement surrounding the Standard Model. He discusses his move to SLAC to conduct research with rapid cycling bubble chambers which turned into his thesis. Dorfan describes his postdoctoral research at SLAC with Martin Perl and his involvement with the Mark I and Mark II experiments, and he describes the opportunities leading to his faculty position at SLAC. He discusses the centrality of the B-factory project, and he describes his considerations when he was offered the directorship at Fermilab. Dorfan describes the impact of the rise and fall of the SSC on SLAC, and he explains the leadership positions which at a certain point put him on track to assume the directorship of SLAC. He describes SLAC’s entrée to astrophysics and the strategic partnership it developed with NASA, and he reflects on whether this transition would have been conceivable to Panofsky’s founding vision for the lab. Dorfan describes the changing culture of SLAC and its increasingly bureaucratized nature toward the end of his directorship, his work in support of advancing cancer research at Stanford, and he discusses the circumstances leading to his directorship of the Okinawa Institute. At the end of the interview, Dorfan emphasizes continuity over change as the dominant theme of his career in science with an arc that has increasingly bent toward concerns of broad societal relevance.