Early schooling and education in England; training in geology at London University; Ph.D. studies at Yale University in late 1950s; work on problems in lunar and Martian geology in the 1960s. Detailed discussion of his research at Yale with Carl Turekian, involvement with high-pressure geological research at University of Western Ontario, and participation in 1960s Air Force-sponsored Luster Sounding rocket program to determine micrometeorite flux rates. 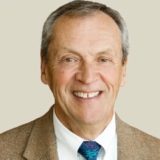 In this interview, David Zierler, Oral Historian for AIP, interviews Robert C. Dynes, Research Professor, Emeritus President of the University of California, and Emeritus Chancellor of UC San Diego. Dynes recounts his childhood in Ontario, his early interests in science, and his decision to attend the University of Western Ontario for college. He explains his decision to pursue a PhD at McMaster University, and he describes some of the advances in superconductivity that were exciting at that time. Dynes discusses his postdoctoral research at Bell Labs and he emphasizes that the research culture was geared exclusively to basic science and had nothing to do with financial considerations toward Bell’s business. He describes his political engagement during the Vietnam Era and he describes the changing culture at Bell during the breakup in the 1980s when he was Director of Chemical Physics. Dynes discusses his research on thin films of metals at the atomic level, and he explains the circumstances leading to his tenure at UC San Diego. He explains how the university was building up across the sciences, and he conveys how important teaching was to him. Dynes describes the process leading to being named Chancellor, and he reviews his challenges and accomplishments in this role. He compares the Chancellor’s responsibilities to those of the UC President, to which he was named in 2003, and he describes his efforts to remain active in research even as he was running the entire UC system. Dynes describes the existential challenge of being president at a time that the state was defunding public education, and he describes some of his key successes in faculty recruitment. He conveys his delight when his term as president ended and he was able to return to the physics department in San Diego. At the end of the interview Dynes cites integrity and creativity as the characteristics that he sees as most fundamental to success in science.