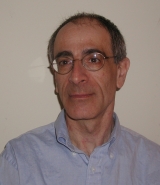 In this interview, David Zierler, Oral Historian for AIP, interviews Marius Clore, NIH Distinguished Investigator, Chief of Section of Protein NMR, Lab of Chemical Physics at the NIH. Clore recounts his childhood in London and his early interests in science, and he explains in detail the British education system that leads to specialization early in one’s undergraduate career. Clore discusses his experience at University College London, where he obtained a medical degree by age 24, and his residency at St. Charles Hospital. He describes his early interests in low temperature kinetic methods and NMR spectroscopy at Mill Hill. He describes his decision to pursue NMR as a career path, which he recognized was in its early stages at that point and which he felt was ripe for development. Clore explains how he taught himself General Relativity from Dirac’s book, and his decision to study at the Planck Institute. He describes the arc of his career at the NIH and his contributions to advancing NMR research and the intellectual atmosphere that allowed him to pursue interesting projects, including HIV research and the XPLOR program. Near the end of the discussion, Clore explains the difference between biophysics and classical physics, and why the NIH has been the ideal place to pursue his research.