Fugate discusses his childhood; early interest in electronics and science; undergraduate education at Case Institute of Technology; Ph.D. in Physics from University of Iowa in 1970; employment at Wright Patterson AFB first as research physicist (1970-1972) and optics group leader (1972-1979); transfer to Kirtland AFB in 1979 as research physicist in optics and technical director of the Starfire Optical Range until 1995; since 1995, senior scientist for atmospheric compensation at Kirtland AFB; comments on graduate training and making transition to military research. Early research on lasers and laser detection; Involvement in adaptive optice (AO) research in early 1980s; AO research as part of Strategic Defense Initiative; role of JASON group; types of research done; effects of classification; competition in AO between Starfire and Lincoln Labs; acquisition of new facilities including 1.5 and 3.5 telescopes. Design features of the 3.5-meter telescope is discussed. Discussion of the declassification process of AO in the early 1990s. Current and future work in AO described by Fugate as well as future role of Starfire Optical Range. 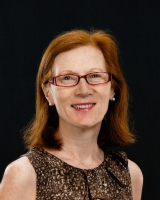