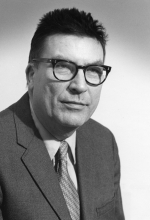 Interview with Blas Cabrera, Stanley Wojcicki Chair Professor of Physics at Stanford. Cabrera recounts his family’s Spanish heritage, he discusses being a third-generation physicist, and he explains the circumstances of his family’s arrival to the United States when he was five. He describes his childhood in Charlottesville, where his father taught at the University of Virginia’s Department of Physics. Cabrera describes his own undergraduate experience at UVA and the opportunities that led to his graduate admission at Stanford to work with Bill Fairbank. He discusses his research on relativistic corrections to the Cooper mass pairs and on developing low magnetic fields. Cabrera conveys the influence of Shelly Glashow’s ideas about the possibility that dark matter is magnetically charged particles, and he describes his postdoctoral work on the GP-B project. Cabrera describes the Valentine’s Day event in 1982 where there was initial excitement that he had detected a magnetic monopole, and he explains his subsequent focus on WIMPs and the broader search for dark matter. He describes his work on the international CDMS collaboration, he explains the transition from CDMS I to CDMS II, and he reviews how the project understands its goals in light of the ongoing mystery of dark matter. Cabrera discusses his tenure as department chair at Stanford and as director of the Hansen Experimental Physics Laboratory. At the end of interview, Cabrera reflects on accepting that he did not detect a magnetic monopole, and he surveys the accomplishments and future prospects of CDMS.