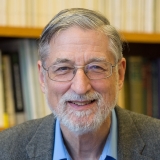 In this interview, David Zierler, Oral Historian for AIP, interviews Bertrand Halperin, Hollis Professor of Mathematicks and Natural Philosophy, Emeritus, at Harvard. Halerpin recounts his upbringing and education in Brooklyn, and his decision to study at Harvard as an undergraduate. He describes some of the leading physicists of the department during that time, and his developing interest and talent for theory. Halperin describes a formative summer internship at New York Life Insurance Company and his work at the dawn of the computer age, and another summer internship at Los Alamos, where he worked on a project on neutron scattering from aluminum. He explains his decision to move to Berkeley and then Princeton for graduate school where he developed his interest in solid state physics. Halperin describes his post-doctoral work in France and his subsequent job at Bell Labs, where he worked on dynamic critical phenomena. He describes being recruited back to Harvard by Paul Martin and his subsequent work on quantum Hall effects and one-dimensional systems research. In the last exchange of the interview, Halperin describes his current interests in experimental puzzles and the behavior of quantum systems.