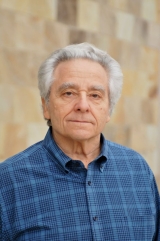 In this interview, David Zierler, Oral Historian for AIP, interviews Marvin Weinstein, Chief Science Officer of Quantum Insights, and emeritus physicist of SLAC. Weinstein describes the origins of Quantum Insights in partnership with David Horn and the development of a data mining algorithm called Dynamic Quantum Clustering (DQC). He recounts his upbringing in Brooklyn, his early interests in physics, and his undergraduate education at Columbia. He describes the big issues in physics at the time, including the two-neutrino experiment, and he explains his decision to remain at Columbia for his PhD to study under Gerald Feinberg. Weinstein explains how he became a postdoctoral student at the Institute of Advanced Study with the endorsement of T.D. Lee to work with Roger Dashen on K13 lepton decays. He describes his subsequent faculty appointments at Yeshiva University and then NYU, and he discusses the opportunities that led to him joining the theory group at SLAC. Weinstein describes his work on PCAC and the Higgs mechanism, and he explains how DQC originated from his interests in quantum mechanics. He explains his subsequent work in lattice field theory and then core and condensed matter physics, and he describes the changing budgetary environment at SLAC over the course of his career. At the end of the interview, Weinstein conveys optimism that his focus on the health industry will demonstrate that the adoption of DQC and its ability to analyze data will lead to better health outcomes across a spectrum of ailments.