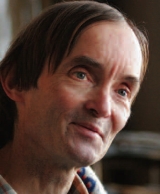 Interview with Robert H. Brandenberger, Canada Research Chair and professor of physics at McGill University. Brandenberger recounts his childhood in Switzerland as the son of organic chemists, and he describes his undergraduate education at the ETH Zurich in physics. He discusses his graduate research at Harvard to work under the direction of Arthur Jaffe, and he describes his first exposure to cosmic inflation. Brandenberger describes his postdoctoral appointment at the ITP in Santa Barbara where he worked with Neil Turok and Andreas Albrecht, and his subsequent postdoctoral work with Stephen Hawking at Cambridge. He explains his initial ideas on cosmic strings as an alternative to inflation and his encounters with Cumrun Vafa and Slava Mukhanov. Brandenberger describes the origins of string gas cosmology, its implications for a multiverse and how it was received among string theorists. He discusses his faculty appointment at Brown and he explains his decision to move to McGill where the opportunity to work with graduate students was stronger. Brandenberger surmises what string theory as a testable proposition would look like, and he reflects on some of the obvious philosophical implications of unknowability in the universe. He explains the difference between a toy model and a proper theory, and he conveys optimism that string gas cosmology will advance research on dark energy. At the end of the interview, Brandenberger reflects on the idea that string theory is "smarter than we are."