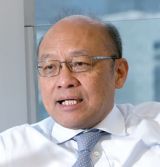 This interview discusses Robert Dicke's childhood experiments; early reading; education at University of Rochester; attitudes of older scientists about research in relativity; work on the Eotvos experiment; early reading in cosmology; early work in the 1950s setting a limit to the cosmic background radiation; motivation for predicting the cosmic background radiation; preference for an oscillating universe; Dicke's evening seminars at Princeton; the origin of the flatness problem, which Dicke first proposed in 1969; Dicke's lecture at Cornell on the flatness problem, attended by Alan Guth; the anthropic argument in connection with the flatness problem; attitude toward the inflationary universe model; attitude toward Center for Astrophysics (CfA) red shift surveys by de Lapparent, Margaret Geller, and John Huchra; Dicke's amazement at the existence of so much matter in the universe; discussion of the anthropic principle; images and metaphors in scientific work; the relationship between theory and observations in cosmology; attitude toward extrapolating the big bang model back to very early time; why Dicke prefers an oscillating universe; the origin of the universe; the question of whether the universe has a point; the question of why cosmology was not taken seriously as a science for a long time.