In this interview Lois Garwin discusses topics such as: how she and husband Richard Garwin met, Richard Garwin in school, growing up in Cleveland, Judaism and antisemitism, Richard Garwin's parents, University of Chicago, Edward Teller, Enrico Fermi, Los Alamos Scientific Laboratory, the hydrogen bomb, Jay Keyworth, IBM, the Garwin children.This interview is part of a collection of interviews on the life and work of Richard Garwin. To see all associated interviews, click here.

In this interview Harold Agnew discusses topics such as: Richard Garwin, University of Chicago, Enrico Fermi, Los Alamos Scientific Laboratory, nuclear weapons, IBM.This interview is part of a collection of interviews on the life and work of Richard Garwin. To see all associated interviews, click here. 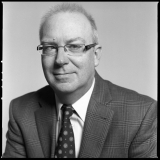