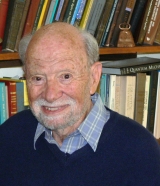 In this interview, David Zierler, Oral Historian for AIP, interviews Robert Finkelstein, (deceased in August 2020) formerly professor emeritus, department of physics, University of California, Los Angeles (UCLA). Finkelstein describes his early interests in physics and his undergraduate education at Dartmouth College, and he describes his formative summer at Columbia University, where he studied under I.I. Rabi. He discusses he graduate work at Harvard University under the direction of John van Vleck, and he discusses van Vleck’s fundamental contributions to quantum mechanics. Finkelstein describes his postdoctoral work expanding on Niels Bohr’s capacity to deal with magnetism, and he discusses his work with Francis Bitter at Massachusetts Institute of Technology (MIT). He describes his conscription to the Navy during World War II, where he worked on mine warfare, and he explains his close relationship with George Gamow and his work on tunneling in quantum mechanics and general relativity. Finkelstein discusses his postwar work at Fermilab, where he became interested in meson physics, and he describes his position at the Institute for Advanced Study at Princeton as a postdoctoral researcher under Robert Oppenheimer, where he continued to work on mesons. He describes getting to know at the Institute, he discusses his first contact with the Feynman diagrams, and he recounts how Jack Steinberger used his calculations which were in agreement with the diagrams. Finkelstein discusses his decision to join the faculty at UCLA, and he explains his opinion that Julian Schwinger was a “deeper” thinker than Feynman. He explains the originals of his unitary field theory, and he describes his contributions to the concept of supergravity. At the end of the interview, Finkelstein explains his ongoing interest with improving upon the Standard Model, and he reflects on the incredible level of understanding about the cosmos that has been developed over the course of his career.