Interview covers Sandra Faber's childhood experiences; parental background; early reading; early preference for steady state model; relationship between questions and answers in science; confusion over being a woman and being a scientist; lack of female role models in science; education at Swarthmore and the influence of Sarah Lee Lippincott there; graduate work at Harvard; husband's job; graduate work at the Department of Terrestrial Magnetism; influence of Vera Rubin; early results of dark matter by Morton Roberts in the late 1960s; thesis work on photometric studies of elliptical galaxies; community's attitude toward excess mass in rotation curves in the late 1960s; motivation for work on the Faber-Jackson relationship between luminosity and velocity dispersion; motivation for work with the Seven Samurai (Burstein, Davies, Dressler, Faber, Lynden-Bell, Terlevich, and Wegner) on peculiar velocities; attitude of the community toward the Seven Samurai work on peculiar velocities; attitude toward the big bang assumption of homogeneity; attitudes toward the horizon problem, the inflationary universe model, missing matter, the flatness problem; discussion of what types of problems can be addressed in cosmology; attitude toward Center for Astrophysics (CfA) red shift surveys by de Lapparent, Margaret Geller, and John Huchra; importance of understanding how large-scale structure is formed; issues of gender in science and the experience of being a woman in science; the ideal design of the universe; the question of whether the universe has a point. 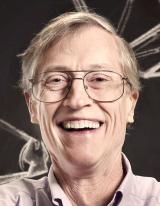 In this interview, David Zierler, Oral Historian for AIP, interviews John Mather, senior astrophysicist at NASA Goddard Space Flight Center and senior project scientist for the James Webb Space Telescope. Mather recounts his childhood in rural New Jersey and the benefits of pursuing a physics education at a small school like Swarthmore. He discusses his research at Berkeley and the value of pursuing dissertation research based on an unsuccessful research experiment. Mather describes his work at the Goddard Institute for Space Studies and the decisions that led to his participation at NASA in the COBE satellite team that measured the heat radiation of the Big Bang. Mather narrates what it was like to learn he won the Nobel Prize for this work, and describes his current work and excitement about the James Webb Telescope.