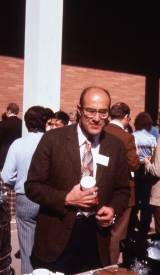 In this interview, David Zierler, Oral Historian for AIP, interviews Charles Zemach, retired from the staff of the Hydrodynamics Group (T3), Theoretical Physics Division at Los Alamos. Zemach recounts his childhood in Manhattan as the son of Jewish immigrants and his experience at Stuyvesant High School. He describes his undergraduate work at Harvard and the influence he felt from Julian Schwinger and George Mackey, and he explains his decision to remain at Harvard for his Ph.D., which he earned under the direction of Roy Glauber. He describes some of the major questions in theoretical particle physics in the early 1950s and the excitement surrounding quantum electrodynamics, and he explains his research on neutron scattering, which grew out of Fermi’s work on simple delta-function interactions twenty years earlier. Zemach discusses his postdoctoral research at the University of Pennsylvania, and then at Berkeley, where he describes the relevance of his research on the bootstrap theory that Geoffrey Chew was developing. He describes the series of events leading to his work for the Arms Control and Disarmament Agency (ACDA) in Washington, which Sid Drell encouraged him to pursue because it would allow him to participate in some of the great challenges in nuclear arms control during the Nixon administration. He explains how the ACDA was set up to solidify Kissinger’s control of nuclear policy, and he describes his role in the SALT I and SALT II negotiations. Zemach discusses his subsequent work at Los Alamos, where Harold Agnew recruited him to become leader of the Theoretical Division and where he focused on fluid dynamics as it related to nuclear bomb design. At the end of the interview, Zemach discusses some of his activities in physics since his retirement in 1993, including his ongoing interest in fluid dynamics and his work on river rights in the Santa Fe area.