Mack Breazeale has been an active member of the Acoustical Society of America and the IEEE almost his entire career. He was born August 15, 1930 in a mining community in Virginia. He later moved to a small town in Tennessee near the current Oak Ridge Laboratory. From there he attended undergraduate school at Berea College and received his Masters from the University of Missouri where he began his studies of ultrasound in liquids. He then studied with Professor Hiedemann at Michigan State. There he continued his studies of ultrasound in liquids. At Michigan State he studied with Bill Cooke and Walter Meyer who went on to recognition in acoustics. He then spent a year on a Fulbright Fellowship in Germany with Professor Kneser. Soon after his return he accepted a position at the University of Tennessee where he spent much of his career studying nonlinear properties of solids. During his time at the University of Tennessee, he directed theses and dissertations of about 50 graduate students. In 1988, he moved to the National Center for Physical Acoustics at the University of Mississippi where he has continued his studies of nonlinear properties of solids. 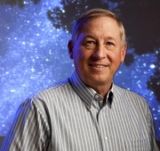