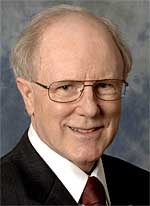 “For his invention and pioneering innovations in both the design and manufacturing of Digital Micromirror Devices (DMDs) integrated into metal-oxide semiconductor (MOS) technology.”

Larry J. Hornbeck, a TI Fellow at Texas Instruments, is the inventor of the Digital Micromirror Device, an optical semiconductor with as many as 2 million movable, individually controllable micromirrors. The DMD manipulates light digitally and forms the foundation for DLP® technology, used in a broad range of all-digital display products that are virtually immune to image degradation, including large-screen DLP HDTVs and DLP projectors for homes, schools, businesses, professional venues, and movie theaters (DLP Cinema® technology).

Hornbeck was born on September 17, 1943, in St. Louis, Missouri. In 1973, after earning his Ph.D. in solid state physics from Case Western Reserve University in Cleveland, Ohio, he joined the Central Research Laboratories of Texas Instruments in Dallas, Texas. Hornbeck began his career developing novel charge-coupled device (CCD) image sensor architectures. In 1977, however, he turned from image sensors to reflective spatial light modulators (SLMs), based on what is known today as microelectromechanical systems (MEMS) technology. Initially focused on developing reflective SLMs for optical processing, by 1982 Hornbeck’s interest had shifted to printing and projection display applications.

His early research centered on two aspects of analog micromirror technology: MEMS architecture and manufacturing. His first breakthrough occurred in 1983, when he developed the first practical manufacturing methods for integrating MEMS micromirrors on top of transistor address circuitry in conventional MOS wafer fabs. While continuing to develop the MEMS architecture, by late 1986 Hornbeck was convinced that a radical new approach to the architecture would be required to overcome the performance and image stability limitations inherent in his analog micromirror designs.

Hornbeck had a second breakthrough in early 1987, the concept for an all-digital SLM technology called the Digital Micromirror Device, a MEMS-based array of fast, reflective, digital light switches monolithically integrated along with a digital address circuit on a silicon chip. By the end of 1987 he had manufactured and demonstrated the first DMD chip.

In 1992 Texas Instruments featured the DMD chip at the heart of its newly created DLP projection display technology. The first products enabled by DLP technology came to market in early 1996. As of 2007, based on Hornbeck’s pioneering work and sustained contributions over the last 30 years, more than 75 manufacturers worldwide incorporate DLP technology into the broadest range of products of any display technology. A sample includes battery-operated, LED-powered DLP pocket projectors weighing less than one pound; slim and lightweight DLP HDTVs that can be hung on the wall; self-contained, DLP Instant Theater projectors with built-in DVD players and sound; and DLP Cinema® projectors lighting up 75-foot screens.

As of 2007, Hornbeck holds 33 U.S. patents, including the fundamental patents for the DMD chip and its manufacturing technology. He has received numerous national and international awards and honors, including an Emmy® Engineering Award from the Academy of Television Arts & Sciences. He is a Fellow of the Institute of Electrical and Electronics Engineers (IEEE), a Fellow of the International Society for Optical Engineering (SPIE), and an elected member of the National Academy of Engineering.

Hornbeck and his wife, Laura, reside on a 32-acre property in the country near Van Alstyne, Texas, north of Dallas. They have two sons, Jason and David.

National and International Awards and Honors: