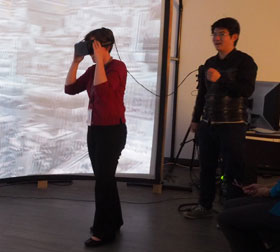 Members of AIP staff were given a tour of the University of Maryland’s Augmentarium in College Park, a revolutionary virtual and augmented (VR and AR) reality facility in the university’s Institute for Advanced Computer Studies. The center features state-of-the-art projection displays, VR and AR visors, in-house graphical computing clusters, and human-computer interaction technologies.

One of the projects highlighted on the Augmentarium tour gave a sneak peek at the future of medical training programs that would allow any medical student in the world to watch live procedures through immersive VR. Although still in the demonstration phase, visitors were able to sample the experience with a full stereoscopic view of film taken during surgery by 360° camera arrays and projected on the curved screen that spanned the length of the room. A few brave members of the tour also tried out an Oculus VR headset which created the visual experience of floating in and around a space ship reminiscent of the iconic 1970s space odyssey of their choosing.

Other projects at the Augmentarium include visualization of big data relevant to atmospheric studies, astronomy, and medicine; development of immersive educational materials for children; and summer programs teaching computer science to teenage girls through VR development. Members of the center are also working with University of Maryland staff and faculty to develop an entirely new virtual and augmented reality degree, combining elements of computer science, engineering, art, and psychology.