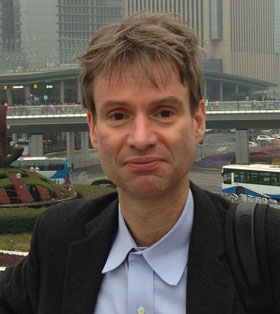 American Institute of Physics recognizes Hamann, an IBM senior researcher, for his interdisciplinary approach to twenty-first century challenges like high performance computing, microscopy and the internet of things

WASHINTON, D.C., September 27, 2016 -- The American Institute of Physics (AIP) announced today that Hendrik Hamann, Ph.D., has won the 2016 AIP Prize for Industrial Applications of Physics, a major award in the field that recognizes scientists who have successfully bridged the gap between the laboratory and industry to develop proven industrial technologies.

The award will be presented Saturday, November 5 at the 2016 Quadrennial Physics Congress in San Francisco, California and includes a cash prize of $10,000.

According to the selection committee, Hamann is being recognized for his work in “pioneering developments leading to the use of physical analytics and real-time sensor-based data to solve a wide variety of twenty-first century challenges."

In his research career, Hamann has pioneered advances in spectroscopy and microscopy and led major projects related to high-performance computing. He is now a senior manager and distinguished research staff member in the Physical Sciences Department at the IBM T.J. Watson Research Center in New York, and he leads IBM’s worldwide activities in the emerging area of the internet of things.

"All of us here at AIP are thrilled to give this award to Dr. Hamann," said Catherine O'Riordan, the chief operating officer at AIP. "His prolific research career is notable not just for all the discoveries he has made but also for his overarching interdisciplinary approach to science."

Hamann said this interdisciplinary approach is a source of professional and personal pride. “I am really proud of the fact that I managed to bridge different disciplines in many aspects of my work and I am not separating science by fields,” said Hamann. “As a scientist, I am always open to new ideas and suggestions regardless where they come from. Only the scientific merit matters.”

Hamann received his Ph.D. from the University of Göttingen in Germany, where he began his career of research and innovation. During his thesis, he developed new spectroscopic techniques to investigate transient, short-lived radicals and used this technique to study the reaction dynamics of the Hydroxyl radical. In one of his earliest professional projects, he developed a novel type of near-field optical microscope to study single molecules at high spatial resolution and its electric field enhancements, which provide the basis of today’s high resolution near-field microscopes.

At the IBM T.J. Watson Research Center, Hamann has continued his pioneering work using a multidisciplinary approach, where he counts among his accomplishments thermally-assisted recording, which pushes the storage density of hard disk drives; the first protrusion control technology (TPC) that is today part of every high performance hard disk drive; and a new phase-change memory cell. He also had an instrumental role in developing IBM’s Measurement and Management Technologies (MMT) to improve energy efficiency of data centers, a technology that was commercialized and has been deployed worldwide more than 1,000 times.

Hamann’s current research interests include sensor networks, sensor-based physical modeling, renewable energy, energy management, precision agriculture, system physics and big data technologies. He is now the leader of IBM’s worldwide activities in the emerging area of the internet of things, an extension of the classical internet of computers to any physical object (whether this is a refrigerator, a light bulb, your heart rate monitor, etc.). This is an area of research that Hamann calls one of the most exciting ones of our time. “The physical world is becoming digitized at an increasing pace and that has profound implications,” says Hamann. “This offers a unique opportunity to understand the physical world better -- in particular the more complex systems such as weather, climate, ground water hydrology or the electric grid -- or to at least describe these systems such that we can better predict them.”

Hendrik Hamann has authored and co-authored more than 90 peer-reviewed scientific papers, and he holds more than 80 patents with over 100 pending patent applications. Hamann is an IBM Master Inventor, a member to the IBM Academy of Technology and has served on governmental committees including the National Academy of Sciences and the National Science Foundation. He is a member of the American Physical Society (APS), the Optical Society of America (OSA), IEEE and the New York Academy of Sciences.

Established in 1977, the AIP Prize for Industrial Applications of Physics recognizes outstanding contributions by an individual or individuals to the industrial applications of physics. The objectives are to publicize the value of physics research in industry, to encourage physics research in industry, to enhance students' awareness of the role of physics in industrial research. The American Institute of Physics (AIP) Corporate Associates and the American Physical Society (APS) alternate in co-sponsoring this $10,000 award with General Motors. Where the AIP award recognizes scientists who have developed proven technologies, the APS award recognizes research that has excellent potential for future success. For more information, see http://www.aip.org/industry/prize.

The American Institute of Physics is a federation of scientific societies in the physical sciences, representing scientists, engineers, educators, and students. AIP offers authoritative information, services, and expertise in physics education and student programs, science communication, government relations, career services, statistical research in physics employment and education, industrial outreach, and history of the physical sciences. AIP publishes Physics Today, the most closely followed magazine of the physical sciences community, and is also home to the Society of Physics Students and the Niels Bohr Library and Archives. AIP owns AIP Publishing LLC, a scholarly publisher in the physical and related sciences. See www.aip.org.