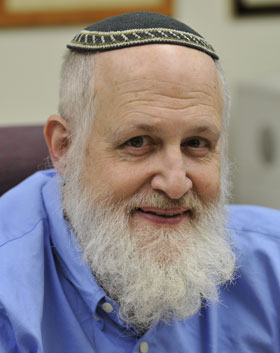 AIP and APS award prize to mathematical and theoretical physicist for his seminal contributions to the field in a broad spectrum of topics.

WASHINGTON, D.C., OCTOBER 20, 2017 -- The American Institute of Physics (AIP) and the American Physical Society (APS) announced that Barry Simon of Caltech is the recipient of the 2018 Dannie Heineman Prize for Mathematical Physics, which is awarded annually to honor significant contributions to the field.

In recognizing Simon, the two organizations cited him “For his fundamental contributions to the mathematical physics of quantum mechanics, quantum field theory, and statistical mechanics, including spectral theory, phase transitions, and geometric phases, and his many books and monographs that have deeply influenced generations of researchers.”

“Dr. Simon has impacted so many fundamental aspects of physics over multiple decades with his mathematical insights. His multiple text books, including the classic ‘Methods of Modern Mathematical Physics,’ which he co-authored with M. Reed, continue to help students develop fundamental skills in modeling physical systems,” said Catherine O’Riordan, interim co-CEO and COO at AIP. “We offer sincere congratulations to Dr. Simon who is joining eight of his co-authors and collaborators who have previously won the Heineman award.”

The accomplishments of Barry Simon’s work form a collection of theoretical understandings ranging from anharmonic oscillators to phase transitions, accounting for a citation that he describes as somewhat of a “kitchen sink.” His mathematical models have deep and fundamental applications to almost all fields of physics from condensed matter to atomic and molecular physics. “I like to describe myself as having the heart of a physicist, but the head of a mathematician,” he said.

Simon applied his mathematical inclinations to physics theory early on, in time to declare the focus as his major while an undergraduate at Harvard University. “One of the reasons I’m not just a pure mathematician is I had an absolutely amazing high school physics teacher named Sam Marantz,” Simon said. “It was because of his influence that I majored in physics in college and I have a physics Ph.D.”

A year after earning his doctorate from Princeton University in mathematical physics, he co-authored the first volume of what would eventually be a four-volume text book: “Methods of Modern Mathematical Physics” is considered in the field to be a standard and significant reference for theoretical physics modeling.

Even a trimmed list of the physics topics Simon’s mathematical findings impacted would be lengthy. Among them is his work describing Berry’s phase, applying geometric insights to the relationship between classical and quantum phases. Simon met Michael Berry in the early 1980s when their paths crossed in Australia, and quickly applied the findings he’d recently made in a separate body of his work to the work Berry was in the process of publishing.

“He told me about his work and in a few days, I figured out its geometric contents,” said Simon. “So, he just had formulae and I figured out a way of understanding it geometrically, which is the way everyone now talks about it.”

Simon’s accomplishments aren’t simply numerous, but reach across an incredibly wide range of fundamental physics systems and phenomena. He credits his mentors and colleagues for this kind of approach, the breadth of which seems to be a key to many of Simon’s most notable discoveries.

“What sometimes happens is a mathematical technique that’s very natural in one setting turns out to be very useful in another setting and you might not have even thought of using it if you haven’t already thinking about it,” said Simon. “It happened that I was doing some work in quantum field theory models and some technique was invented. It turned out to be the key for understanding something in the models for nonrelativistic quantum mechanics, and if I were just thinking about the nonrelativistic quantum mechanics, I never would have found this result.”

Simon continues to publish while in his role as professor emeritus at Caltech, adding to his list of over 20 published books. He published a five-volume graduate course in analysis less than two years ago and is currently working on another book in addition to numerous reviews.

Barry Simon is IBM Professor of Mathematics and Theoretical Physics, Emeritus at the California Institute of Technology. He is also an author of several texts, including Methods of Modern Mathematical Physics Vol I-IV, which were voted most significant mathematical physics book of the 20th century at 2000 ICMP. Simon received his bachelor’s degree from Harvard University in 1966 and his doctorate from Princeton University in 1970. He received the Steele prize for lifetime achievement from the American Mathematical Society. http://www.math.caltech.edu/simon/simon.html

The Heineman Prize is named after Dannie N. Heineman, an engineer, business executive, and philanthropic sponsor of the sciences. The prize was established in 1959 by the Heineman Foundation for Research, Education, Charitable and Scientific Purposes, Inc. The Prize will be presented by AIP and APS on behalf of the Heineman Foundation at the APS March 2018 Meeting in Los Angeles, CA. A special Ceremonial Session will be held at the meeting where Simon will receive the $10,000 prize. http://www.aps.org/programs/honors/prizes/heineman.cfm

The American Physical Society (www.aps.org) is a non-profit membership organization working to advance and diffuse the knowledge of physics through its outstanding research journals, scientific meetings, and education, outreach, advocacy and international activities. APS represents over 53,000 members, including physicists in academia, national laboratories and industry in the United States and throughout the world. Society offices are located in College Park, MD (Headquarters), Ridge, NY, and Washington, DC.