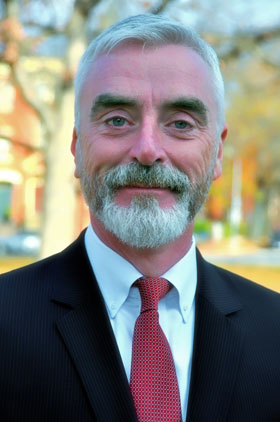 WASHINGTON, D.C., January 31, 2018 -- The American Institute of Physics (AIP) announced the hiring of a new CEO today. Experimental physicist Michael H. Moloney was selected by an AIP executive search committee and unanimously approved by AIP’s board of directors. He will assume the role March 5, 2018.

Moloney holds a doctorate in experimental physics from the University of Dublin, Trinity College in Ireland, and he becomes the ninth executive to lead AIP. He previously held the position of Director for Space and Aeronautics at the Space Studies Board and the Aeronautics and Space Engineering Board of the U.S. National Academies of Sciences, Engineering, and Medicine.

Formed 87 years ago, AIP is a nonprofit federation with 10 member societies that collectively represent more than 120,000 scientists, engineers, educators and students around the world. AIP offers programs, products and services for this community and seeks to advance, promote and serve the physical sciences for the benefit of humanity.

“I know I speak on behalf of the entire AIP board of directors when I say that we are delighted to welcome Dr. Moloney as our new CEO," said John Regazzi, chairman of the AIP board of directors. "His years at the National Academies and his policy and media experience distinguish him as a strategic leader who knows how to foster the translation of fundamental scientific knowledge into practical programs that create value in our community and benefit everyone.”

The Aeronautics and Space Engineering and Space Studies boards Moloney has led for the last eight years are among the largest units at the National Academies. The Space Studies Board, which turns 60 this year, and the Aeronautics and Space Engineering Board, which turned 50 in 2017, have been deeply entwined with NASA and the U.S. space program since the beginning. They have played and continue to play a crucial role in formulating U.S. policy and developing space and aeronautics research priorities at NASA, NSF, NOAA and other federal agencies.

These boards facilitate gatherings of top experts on specific subjects who deliberate on important questions and produce comprehensive reports that help steer decision-making in Congress, at federal agencies, and in the larger science and policy communities. The reports offer the best, unbiased consensus advice on everything from the frontiers of space and Earth science research and the future of human spaceflight to cutting edge aeronautical research.

Since joining the National Academies, Moloney has overseen the production of close to 100 such reports, including five decadal surveys in astronomy and astrophysics, Earth science and applications from space, planetary science, microgravity sciences, and solar and space physics. He has also played a leading role in the production of decadal surveys in several physics disciplines -- including atomic, molecular and optical physics, condensed matter physics, and plasma physics.

The American Astronomical Society, one of AIP’s 10 member societies, awarded Moloney a special citation in 2011 for his leadership on the decadal survey “New Worlds, New Horizons in Astronomy and Astrophysics.” He is also a senior member of the American Institute of Aeronautics and Astronautics, an AIP affiliated society, and in 2016 Moloney was inducted into the International Academy of Astronautics in recognition of his leadership in space policy.

Moloney also worked for more than seven years as a foreign service officer for the Irish government, serving at both the Irish Embassy in Washington, D.C., and the Irish Mission to the United Nations in New York, as well as working as a press officer for the service in Dublin.

He said he is looking forward to leading AIP as it heads toward the second century of its existence -- and to embracing the great opportunities the institute, its societies, the community in general and humanity at large will face in the 21st century.

"Science is rapidly changing and becoming more interdisciplinary, and the fields of physical science connect like never before," Moloney said.

"So much of our modern life is dependent on technology. Technology, in turn, is based on the underlying fundamental discoveries of science. Our collective future, therefore, will continue to be linked to progress being made by the scientists and engineers who are members of the professional societies that constitute AIP. I look forward to working with the AIP community to ensure we can continue to advance and promote the physical sciences for the benefit of all of us," he said.

Moloney's appointment ends the search for a successor for AIP's previous CEO, Robert G.W. Brown, who retired last May. Since then, AIP has been led by two interim co-CEOs, Catherine O'Riordan, who is also the Chief Operating Officer, and Catherine Swartz, who is the Chief Financial Officer. Both will reassume their prior officer roles in March.

AIP Publishing is a wholly owned not-for-profit subsidiary of the American Institute of Physics (AIP). AIP Publishing’s mission is to support the charitable, scientific and educational purposes of AIP through scholarly publishing activities in the fields of the physical and related sciences on its own behalf and on behalf of our publishing partners to help them proactively advance their missions. https://publishing.aip.org

Michael H. Moloney becomes the ninth CEO of the American Institute of Physics on March 5, 2018. Previously he was the Director for Space and Aeronautics at the Space Studies Board (SSB) and the Aeronautics and Space Engineering Board (ASEB) of the U.S. National Academies of Sciences, Engineering, and Medicine. He has served as a study director at the National Materials Advisory Board; the Board on Manufacturing and Engineering Design; the Center for Economic, Governance, and International Studies; and the Board on Physics and Astronomy. The American Astronomical Society awarded Moloney a special citation in 2011 for his leadership on the decadal survey “New Worlds, New Horizons in Astronomy and Astrophysics.”

At the Academies, Moloney served as study director or senior staff on about 100 reports on subjects as varied as quantum physics, nanotechnology, cosmology, the nation’s helium reserves, counterfeit currency, corrosion science and nuclear fusion. He was senior or lead staff on the physics decadal surveys on atomic, molecular, and optical science, condensed matter and materials physics, and plasma physics. At the SSB and ASEB he oversaw decadal surveys in astronomy and astrophysics, planetary sciences, Earth science and applications from space, solar and space physics, and microgravity sciences.

Prior to his service at the Academies, Moloney was a foreign service officer for the Irish government for seven years, serving at the Irish Embassy in Washington, D.C., and the Irish Mission to the United Nations in New York. An experimental physicist by training, Moloney holds a doctorate from the University of Dublin, Trinity College in Ireland, and he received his undergraduate degree in experimental physics at University College Dublin, where he was awarded the Nevin Medal for Physics.