WASHINGTON, April 1, 2020 -- Peering into the darkness to see what we could not previously see, the Hubble Space Telescope has been delighting scientists and the general public for 30 years with revealing details and images of galaxies, celestial phenomena, and planets within and beyond our solar system. Launched in 1990 with an ambitious mission to probe the age and expansion of the universe, Hubble continues to open windows to new cosmic mysteries and will do so for years to come.

In addition to providing researchers with more than a million observations and corresponding data, Hubble has provided beautiful and astounding images to the general public, inspiring awe of our universe and a greater interest in astronomy. From chronicling the birth and death of stars across our galaxy to mapping dark matter, the telescope has answered some nagging scientific questions, created more inquiries, and pushed the boundaries of understanding and wonder among many astronomers and astrophysicists. 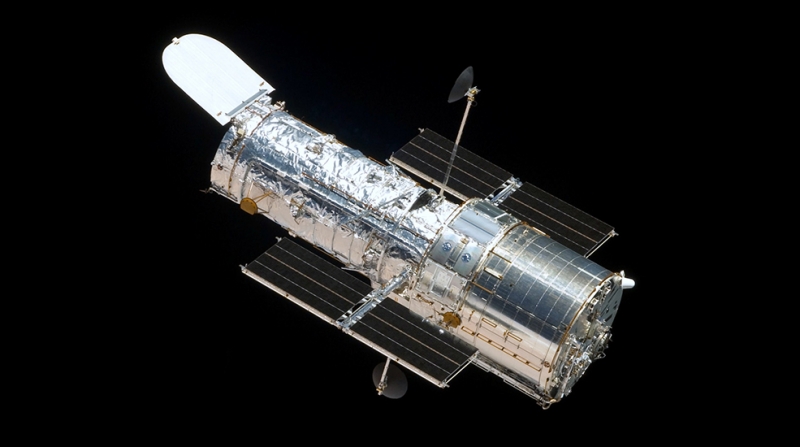 The American Institute of Physics recognizes and celebrates the momentous occasion of the 30th anniversary of the launch of the Hubble Space Telescope. From the Space Shuttle Discovery, which launched April 24, 1990, the telescope was deployed into orbit by a crew of NASA astronauts and began its mission of looking into deep space. Its first photo was of a binary star, HD96755, in the open cluster NGC 3532, about 1,300 light-years away from Earth. Since then, images of galaxies 10 billion light-years away, black holes, and more recently exoplanets have dazzled the world and improved our understanding of the wonder of the universe.

“Since the launch of the Hubble Space Telescope in 1990, this great observatory has opened our eyes to the wonders of the universe, heralding a new era in astronomy, astrophysics and planetary science. Images from Hubble adorn the halls of science and the bedroom walls of students of all ages,” said Steve Mackwell, deputy executive officer of AIP and an internationally recognized expert on planetary science.

“Beyond the spectacular imagery, Hubble has advanced our understanding of the farthest stars and galaxies and brought new understanding of the structure and dynamics of the planets in our solar system. It has enabled astronomers to observe the ever-changing cloudscapes of the giant planets, illuminating the evolution of their atmospheres over time scales that no planetary spacecraft alone could achieve, and shone new light on the early history of the solar system. Despite the ravages of time, the telescope continues to open the frontiers.”

Physics Today, a publication by AIP, is highlighting the anniversary in its April issue with a look back at the history of the telescope and analysis of Hubble’s discoveries over the past 30 years. A centerfold in the print edition will pinpoint the locations of Hubble’s observations on a map of the sky and highlight the telescope’s great discoveries and images.

This same map will be available online as part of Physics Today’s interactive presentation on Hubble. In addition, online articles will chronicle Hubble’s first few years in orbit, when a misshapen mirror blurred its vision, and break down the astronomical objects the telescope has observed.

“Among the observations (astronomer Lyman) Spitzer anticipated in 1968 were of Cepheid variable stars, whose measurable fluctuations in brightness are proportional to absolute luminosity and therefore yield cosmic distances. The Large Space Telescope could extend the range of Cepheid observations by an order of magnitude.” – from Hatching Hubble, Physics Today.

In April’s issue of Sky & Telescope, published by the American Astronomical Society, an AIP Member Society, amateur astronomers talk about what it is like working with NASA on space observations and reflect on some of the amazing and famous images to come from Hubble in a photo essay for the cover article.

“The telescope and the science have been featured on our cover a record number of times,” said Peter Tyson, editor-in-chief of Sky & Telescope. “From construction, through launch and deployment, to five service calls by space shuttle astronauts, but mainly to the magnificent images and groundbreaking discoveries that just keep coming, Hubble has been making headline news for more than four decades. Congratulations to the visionaries who conceived it and the countless scientists and engineers who built, operate and use it. They’ve brought the universe down to Earth for an entire generation and inspired people the world over to pay closer attention to what goes on over our heads.”

The James Webb Space Telescope is expected to launch in 2021 and will complement and extend the discoveries of Hubble. While Hubble is best suited for viewing in the ultraviolet and optical ranges of the light spectrum, JWST is a more powerful telescope and will see farther out in space and back in time at near infrared wavelengths. It is expected that both observatories will continue to amaze the scientific community and the world at large with their discoveries for many years to come.

The American Institute of Physics (AIP) is a 501(c)(3) membership corporation of scientific societies. AIP pursues its mission—to advance, promote, and serve the physical sciences for the benefit of humanity—with a unifying voice of strength from diversity. In its role as a federation, AIP advances the success of its Member Societies by providing the means to pool, coordinate, and leverage their diverse expertise and contributions in pursuit of a shared goal of advancing the physical sciences in the research enterprise, in the economy, in education, and in society. In its role as an institute, AIP operates as a center of excellence using policy analysis, social science, and historical research to promote future progress in the physical sciences.