Home > AIP News > Getting a Leg Up on Love: Spiders Offer Limb for Mating Survival

Getting a Leg Up on Love: Spiders Offer Limb for Mating Survival 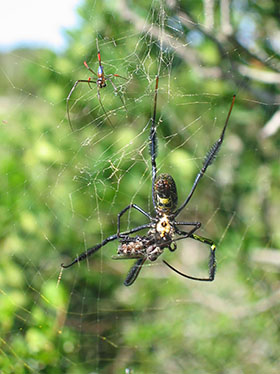 WASHINGTON, February 14, 2020 – Male tufted golden orb weaver spiders pull out all the stops when trying to court a female, including offering up their own legs to their potential mates for the sake of love. A recent Inside Science article outlines this unique mating technique, which involves a bit of cannibalism in order win over a lady friend.

The behavior, known as autotomy, is a defensive mechanism that allows the male spider to detach one of its own legs and offer it to the female for a meal while he proceeds to mate with her. This dinner may not seem quite as romantic as a typical Valentine’s Day date night, but it can help the male the orb weaver live to see another day.

The article, "Male Spiders Sacrifice Legs to Placate Cannibalistic Lovers," is based on recent research published in Animal Behaviour by evolutionary biologists Jutta Schneider and Rainer Neumann, as well as a previous study published in Behavioral Ecology by Schneider and Lutz Fromhage.

Sacrificing a leg for the sake of copulation both increases the spider’s chances of mating and escaping alive after copulation. This factor is crucial for male tufted golden orb weavers as they typically only mate once in their lifetime.

“We showed that males in this species preferentially mate with feeding females. For example, they wait to approach until the female has caught a prey. This strategy reduces the risk of cannibalism for the male,” said Fromhage.

The researchers found the female tufted golden orb weavers particularly liked male legs. When presented with the legs of other insects, the female orb weaver was more likely to take the leg of a male of her own species rather than the appendage of an insect or a different arachnid species.

“I find it most puzzling that females like to feed on these thin male legs for such a long time. I doubt that it is the nourishment they enjoy, since it must be mostly chitin. But it keeps them busy,” said Schneider.

After successful copulation, the male spider will remain near the female to guard her and protect her against other males.

“Even spider males that had lost multiple legs during mating were able to guard their female effectively against able-bodied rival males. They achieved this by making up for their physical handicap by greater fierceness, as if they had lost all fear after the act of mating,” said Fromhage.

Schneider intends on conducting further laboratory-based experiments to continue to confirm how and why the male tufted golden orb weaver spider sacrifices his leg.

The article, "Male Spiders Sacrifice Legs to Placate Cannibalistic Lovers" by Joshua Learn, appeared Feb. 6, 2020, on Inside Science and can be accessed at https://www.insidescience.org/news/male-spiders-sacrifice-legs-placate-cannibalistic-lovers.

Inside Science is an editorially independent nonprofit science news service run out of the American Institute of Physics and supported by a coalition of underwriters. Inside Science produces breaking news stories, features, essays, op-eds, documentaries, animations, and news videos. These appear on insidescience.org as well as on partner sites across the web and in print. Media outlets that would like to syndicate this or any other Inside Science story should contact insidesciencereprints [at] aip.org to inquire about one-time or ongoing content licenses.