Small Flying Vehicles, Complete with Flapping Wings, may now be Designed, Thanks to Virginia Tech Study of the Inflight Movement of Fruit Bats' Wings

WASHINGTON D.C. Feb. 18, 2014 -- By exploring how creatures in nature are able to fly by flapping their wings, Virginia Tech researchers hope to apply that knowledge toward designing small flying vehicles known as "micro air vehicles" with flapping wings.

More than 1,000 species of bats have hand membrane wings, meaning that their fingers are essentially "webbed" and connected by a flexible membrane. But understanding how bats use their wings to manipulate the air around them is extremely challenging -- primarily because both experimental measurements on live creatures and the related computer analysis are quite complex.

In Virginia Tech's study of fruit bat wings, the researchers used experimental measurements of the movements of the bats' wings in real flight, and then used analysis software to see the direct relationship between wing motion and airflow around the bat wing. They report their findings in the journal Physics of Fluids.

"Bats have different wing shapes and sizes, depending on their evolutionary function. Typically, bats are very agile and can change their flight path very quickly -- showing high maneuverability for midflight prey capture, so it's of interest to know how they do this," explained Danesh Tafti, the William S. Cross professor in the Department of Mechanical Engineering and director of the High Performance Computational Fluid Thermal Science and Engineering Lab at Virginia Tech.

To give you an idea of the size of a fruit bat, it weighs roughly 30 grams and a single fully extended wing is about 17 x 9 cm in length, according to Tafti.

Among the biggest surprises in store for the researchers was how bat wings manipulated the wing motion with correct timing to maximize the forces generated by the wing. "It distorts its wing shape and size continuously during flapping," Tafti noted. 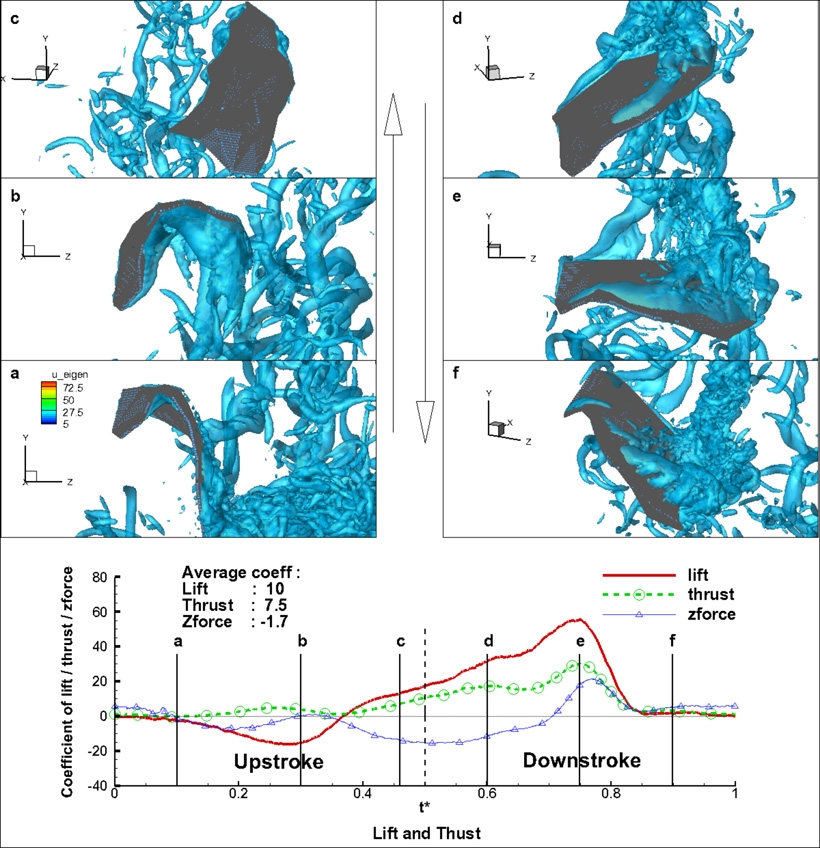 For example, it increases the area of the wing by about 30 percent to maximize favorable forces during the downward movement of the wing, and it decreases the area by a similar amount on the way up to minimize unfavorable forces. The force coefficients generated by the wing are "about two to three times greater than a static airfoil wing used for large airplanes," said Kamal Viswanath, a co-author who was a graduate research assistant working with Tafti when the work was performed and is now a research engineer at the U.S. Naval Research Lab's Laboratories for Computational Physics and Fluid Dynamics.

This study was just an initial step in the researchers' work. "Next, we'd like to explore deconstructing the seemingly complex motion of the bat wing into simpler motions, which is necessary to make a bat-inspired flying robot," said Viswanath. The researchers also want to keep the wing motion as simple as possible, but with the same force production as that of a real bat.

"We'd also like to explore other bat wing motions, such as a bat in level flight or a bat trying to maneuver quickly to answer questions, including: What are the differences in wing motion and how do they translate to air movement and forces that the bat generates? And finally, how can we use this knowledge to control the flight of an autonomous flying vehicle?" Tafti added.