Washington, D.C., Sept. 29, 2015 -- Water, soup, wet paint and other liquids often leave stains as they dry. They include "coffee rings" from dried coffee droplets, soup stains on the dining table, and the patterns salted snowmelt lays down on the pavement. Solvents leave a variety of residues as they evaporate from suspensions, including single rings, periodic bands, shapes resembling spider webs, and even wide uniform films assembled from arrested particles.

The primary mechanism behind evaporative patterning has long been known: water evaporates faster at the edge of a drop, which gives rise to a fluid flow carrying dissolved substances all the way to the edge. There, the sub-nanometer salt molecules, micron-sized "colloids," or granular particles of coffee form aggregates, leading to residual everyday patterns.

But how does the transition between different types of patterning occur? Can we control patterning by altering the dynamics of evaporation—the type of dissolving liquid, the concentration of particles, or changing their size and shape? A team of researchers from Harvard University, led by L. Mahadevan, professor of Applied Mathematics and Physics, explored these questions and describes their findings in the journal Physics of Fluids, from AIP Publishing.

"We've primarily focused -- experimentally and theoretically -- on the transition between periodic bands and uniform films, which form via drying-induced deposition on a substrate vertically immersed in a volatile suspension," explained Nadir Kaplan, the lead author and a postdoctoral research fellow in Applied Mathematics at Harvard University's John A. Paulson School of Engineering and Applied Sciences.

By doing so, the team discovered that the mechanism of banding and filming is surprisingly simple. "While the liquid evaporates, two things happen simultaneously: First, the level of liquid in the container decreases, and second, a deposit forms at the tip of the meniscus [the curved upper surface of liquids in a container], which emerges when the liquid climbs the glass wall up to a preferred height," said Kaplan. "At low particle concentrations, when the deposit grows slower than the decline rate of the level of the liquid, the liquid level moves away from the deposit. Inevitably, the meniscus in between exceeds the height the liquid can support and 'breaks up.' This results in a single band, and periodic bands are formed as the process repeats. At sufficiently high particle concentrations, however, the deposit grows fast enough so that meniscus break-up is avoided and uniform films occur."

Based on this simple mechanism, "we have theoretically determined the critical concentration at which a transition from banding to filming occurs, and how the size of each band depends on the solute concentration, and show that we can explain the basic features of our experiments," said Kaplan.

A key feature of the team's theory is the ability to account for the multiphase nature of the system -- a solid phase (particles) and a liquid phase (solvent), using ideas that were developed by Mahadevan and colleagues earlier, in a study of blood flow and clogging. "When the suspension is dense, the dynamics of the solute and solvent can significantly deviate from each other, and our study allows us to describe these phenomena in a simple way," Mahadevan said.

Because of the small particles involved, "manipulating the physical processes at work turns out to be a better strategy than individually placing them," said Kaplan. "After all, colloidal particles can self-organize into ordered or disordered assemblages via evaporation-driven deposition in a volatile liquid." This technique is widely used to synthesize photonic crystals -- ordered structures that manipulate light in a selective manner -- or create materials with uniform pores for applications in tissue engineering or biotechnology. 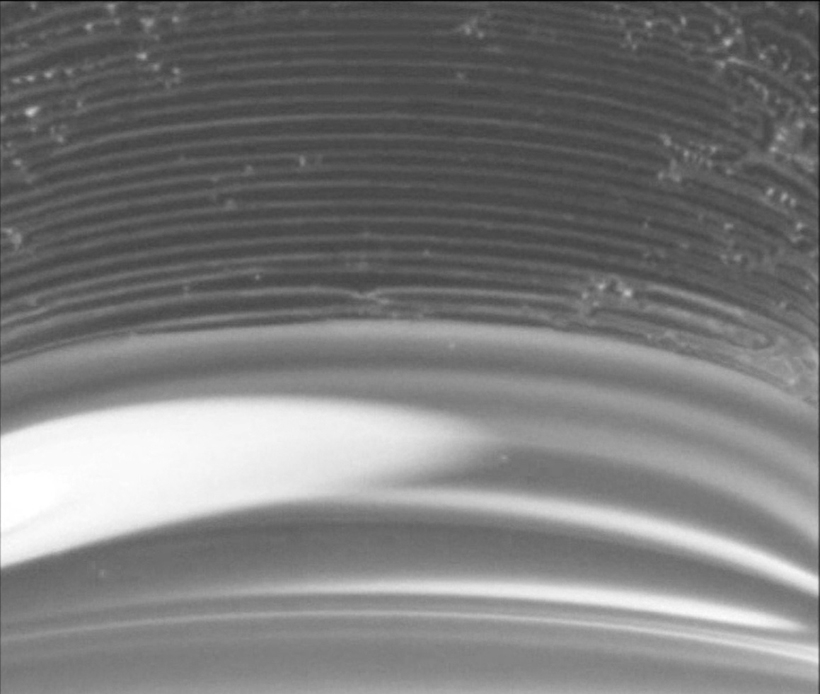 "For some applications, such as the synthesis of optical systems that can be used to control the absorbance and reflectance of light, a uniform film deposition is preferred. For others, such as building materials producing 'structural color' by selectively reflecting light (just like in opals or avian skin), banded patterns may be favored," said co-author Joanna Aizenberg, professor of Materials Science and Chemistry at Harvard, whose group did the experiments that stimulated this study.

"We have shown that the evaporation rate and a delicate balance between hydrodynamic and surface forces allow for the control of drying-induced patterning type," said Mahadevan.

Although the team achieved greater control over patterning at a macroscopic scale, "tuning microscopic organization by the rate of the suspension flow remains a theoretical mystery at the colloidal particle level," Kaplan noted.

"Experimentally, order and disorder within deposits are currently only crudely controlled. We hope to develop a more systematic theoretic approach to this problem, which will eventually help us to better understand how flow and order are linked, enabling us to optimize the conditions for the production of structured optical surfaces for a range of applications," said Mahadevan.

This work was funded by the U.S. Air Force Office of Scientific Research and the Kavli Institute for Bionano Science and Technology at Harvard University.