Broadband Transformational Optics Lens, Described in Applied Physics Letters, May Lead to Antenna Dishes that are Flat or Conform to Any Surface

WASHINGTON D.C., April 14, 2014 -- By depositing an array of tiny, metallic, U-shaped structures onto a dielectric material, a team of researchers in China has created a new artificial surface that can bend and focus electromagnetic waves the same way an antenna does.

This breakthrough, which the team is calling the first broadband transformation optics metasurface lens, may lead to the creation of new types of antennas that are flat, ultra low-profile or conformal to the shape of curved surfaces.

The new lens, described in AIP Publishing's journal Applied Physics Letters, was fabricated by Tie Jun Cui and colleagues at Southeast University in Nanjing, China and is an example of a metasurface or metamaterial -- an artificial material engineered in the lab that has properties not found in nature. In this case, by coating the surface with the tiny U-shaped elements, it acquires properties that mimic something known as a Luneburg lens.

First discovered in the 1940s Luneburg lenses are traditionally spherical optics that interact with light in an unusual way. Most lenses are made of a single material like plastic or glass that bends light passing through in a consistent, characteristic way -- a key characteristic of the material, which is called its "index of refraction." Some materials, like glass, have a higher index of refraction and bend light more than other materials -- such as quartz. 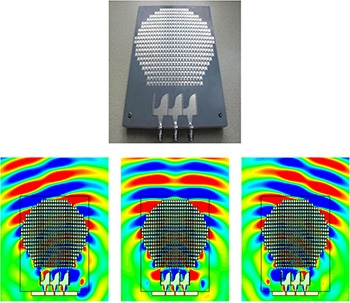 A Luneburg lens has the unusual property of bending light more or less depending on where the light strikes the lens. This is because in a Luneburg lens, the index of refraction varies across the spherical lens body, making it very different than a normal lens. Luneburg lenses can focus light or incoming electromagnetic waves to an off-axis point at the edge of the lens (not directly in front or behind it as a normal lens would do). Or they can uniformly channel electromagnetic waves emanating from a nearby point source and radiate them in a single direction -- something no spherical lens can do.

Because of their properties, Luneburg lenses find a variety of applications as radar reflectors and microwave antennae. However, the spherical shape of a typical Luneburg lens is inconvenience in some applications, Cui said, which is why he and his colleagues used inhomogeneous artificial structures to create a flat surface that acts like a Luneburg lens.

The new work compliments the traditional way of constructing Luneburg lenses based on geometric optics -- as well as a second way discovered in the last few years that uses holographic optics.

"We now have three systematical designing methods to manipulate the surface waves with inhomogeneous metasurfaces, the geometric optics, holographic optics, and transformation optics," Cui said. "These technologies can be combined to exploit more complicated applications."